DORIS TROY; I’ll Do Anything (Kent) 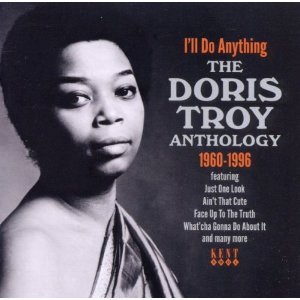 The sadly underrated Doris Troy first came to prominence in the UK thanks to the mid 60s beat brigade. Back then, any beat group worth their mop tops would usually feature a cover of a Doris Troy song in their set; indeed the Hollies took the no. 2 chart spot in 1964 with a version of her ‘Just One Look’. Keen music fans needed to know more about the lady whose songs were so damn catchy even when delivered by the standard two guitars, bass and drums line up. They discovered that the onetime Apollo Theatre usherette had graduated from sing backing vocals (alongside the Warwick sisters and Cissy Houston) to a solo recording contract with the legendary Atlantic label – where she cut those fabulous ’63 timepieces ‘Just One Look’,  ‘Whatcha Gonna Do About It’ and ‘Tomorrow Is Another Day’.

Since then Doris moved on to work for a number of other labels – pitching up in England in 1965 and staying on and off for a number of years. In the UK she returned to session work (notably with Dusty Springfield and Tom Jones) until a session with George Harrison led to a solo contract with the Apple label. She relocated to new York in 1979 where, with her sister, Vy Higginsen, she put together a musical based on her career. The show – ‘Mama I Want To Sing’ – was a Stateside success and in 1995 it opened in London. From then till her untimely death in 2004 Doris recorded sporadically and continued to work the live circuit but despite her high profile and achievements there have been few proper retrospectives of her work… till now!

Here the Ace subsidiary, Kent has collected 26 prime cuts from every era of Doris’ career and they underline what those mid 60s collectors discovered; that Doris Troy was a soul singer to rival the very best. The earliest recording is 1960’s ‘What A Wonderful Love’ (recorded under the name Doris Payne) and the newest is her 1996 duet with James Hunter, ‘Hear Me Calling’. In between there are numerous magical moments – including all those Atlantic classics and a clutch of Apple recordings. A jazzy ‘He’s Qualified’ is another standout as is the previously unissued ‘Let Me Make Love To You’. That one is a lazy, rolling cover of an O’Jays’ song and features a sweet rap from Vy Higginsen. Cherry picking tracks here though is a redundant exercise. Truthfully there are no duds here and the album is a wonderful precursor the the movie version of ‘Mama I Want To Sing’ which is set to hit cinemas later this year.