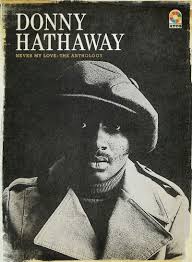 Poor old Amy Winehouse was never known for her sound judgement. On one thing ,though, she was bob on! She knew (like all true soul connoisseurs) the greatness of Donny Hathaway. Name checked on ‘Rehab’ and mentioned in despatches on ‘Lioness; Hidden Treasures’, Hathaway was a kind of guiding light for the London songstress. She revered his music and maybe in his troubled and disturbed life she recognized many of the demons that afflicted her. Whatever, Amy would have been delighted with this new 4 CD box set chronicling the St Louis born singer’s career.

It begins with a 22 track collection of the best of his solo work – starting with his Curtom single ‘I Thank You Baby'(a duet with June Conquest) and ending with the lovely 1978 ‘You Were Meant For Me’. In between we get all of the man’s big moments including two parts of ‘The Ghetto’, the Charleston blue movie song and the now anthemic ‘Someday We’ll All Be Free’.

The set’s third CD focuses on Hathaway’s live recordings, or more specifically the live recording he made at New York’s Bitter End club in 1971. Some of that music, of course, appeared on his 1972 ‘Live’ long player but here we get most of that Bleaker Street gig and as a bonus the compilers have included “different” versions to those that appeared on the ’72 set. For instance, enjoy a cooler, slower take of ‘What’s Going On’. Not better than the ’72 track – but different and taken with it, offering an insight into Hathaway’s performing logic.

Disc 4 is a 13 track collection of music he recorded with Roberta Flack and it naturally includes the biggies (‘Where Is The Love’, ‘The Closer I Get To You’ etc) along with more experimental stuff like the seven minute instrumental ‘Mood’.

Now back to the set’s second CD… the one that will draw the collectors since it offers up 13 previously unreleased studio recordings. They include Donny’ sombre reading of the Association’s pop hit ‘Never My Love'(for which the collection is named), a surprising country tinged ‘A Lot Of Soul’, a laid back instrumental/unfinished backing track ‘Latin Time’, an almost Northern soul flavoured ‘Don’t Turn Away’ and a clutch of wonderful, beautiful ballads – ‘Memory Of Our Love’ and ‘Sunshine Over Showers’.

There’s so much excellence here that a quick review like this can’t do the music and the man full justice. However, a purchase –which I’d say is pretty much essential (put it on your Christmas list) – will allow you to access not just the music but my esteemed SJF colleague Charles Waring’s excellent, extensive notes that put everything into proper context.