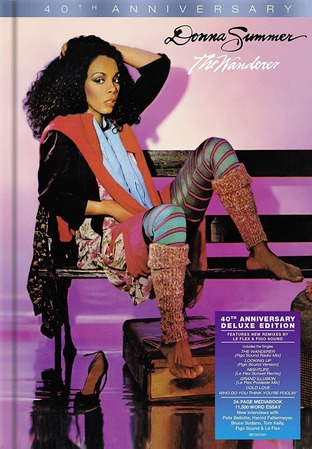 In October 1980, when Donna Summer released ‘The Wanderer,’ her debut LP for the newly formed Geffen label, she was the undisputed queen of disco having racked up a welter of memorable dance floor hits during the previous decade for Casablanca. But with the “Disco Sucks” movement gathering traction around the world, Summer – whose previous album, 1979’s ‘Bad Girls’ had topped both the US pop and R&B charts – elected to change musical direction and leave disco behind. Retaining her long-time producers Giorgio Moroder and Pete Belotte, she made ‘The Wanderer,’ which fused rock with pop and gospel elements. Understandably, perhaps, the album was a shock for disco lovers and didn’t do as well chart-wise as her previous recordings; it stalled at No. 13 in the US pop charts and No. 12 in the country’s R&B rankings. Often overlooked, even by her staunchest fans, ‘The Wanderer’ has now been resurrected for a special 40th-anniversary release.

As an example of how far Summer had switched musical allegiances with ‘The Wanderer,’ the anthemic ‘Cold Love,’ driven by grungy guitar chords, garnered the singer a Grammy nomination in the category of Best Female Rock Vocal Performance; a which would have been unthinkable just a few years earlier for the darling of the disco scene. The parent album was certainly a risk-taking venture and though it didn’t top the charts, it’s an amalgam of different styles didn’t alienate all of her fans. The opening title song was the lead single from the album and almost sounds like a parody or pastiche of ’50s rock and roll, though updated by synths and drum machines. It was catchy enough to make No. 3 in Billboard’s Hot 100 but it’s not the best cut on the album. To this writer’s ears, that honour goes to the driving ‘Looking Up,’ closely followed by the rockier ‘Nightlife’ and ‘Breakdown.’  ‘Who Do You Think You’re Fooling?’, a slice of bright, danceable pop, is also appealing and on the album’s closing cut, the singer taps into her gospel roots with the self-penned ‘I Believe In Jesus.’

Musical purists among Summer fans probably won’t be pleased to learn that the album has been re-sequenced for the 40th-anniversary edition; it opens with three new remixes by London DJ ‘Le Flex’ of ‘The Wanderer,’ ‘Looking Up’ and ‘Nightlife,’ which are intended, no doubt, to appeal to fans of contemporary dance music. You’ll also find extended versions of all three remixes at the end of the album. Presented in a stylish long box, the package is rounded off nicely with an extensive liner note essay which includes new quotes from some of Summer’s closest collaborators.

Re-evaluating the album today, ‘The Wanderer’ doesn’t sound as radical as it did 40 years ago but that’s because contemporary listeners are accustomed to music where genre fluidity is commonplace; but in 1980, Donna Summer was a trailblazer whose chameleon-like change of musical hues would influence a raft of female singers following in her wake, including a certain Madonna Ciccone.

Available on CD and vinyl LP, ‘The Wanderer’ is released on October 16th via Driven By The Music.