DONNA SUMMER: ‘I Remember Yesterday’ and ‘She Works Hard For The Money’ (Culture Factory) 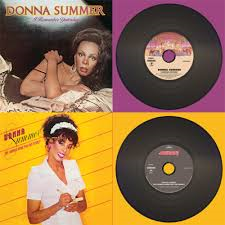 In the summer of 1977, disco queen Donna Summer, then 28, ruled the UK’s hit parade with ‘I Feel Love,’ the classic Giorgio Moroder-helmed track that topped Britain’s charts for a long, hot month. With its robotic sequencer groove, sci-fi-esque synthesiser chords  and Summer’s erotic vocals (which basically just consisted of her intoning the words “I feel love” over and over), ‘I Feel Love,’ proved to be a revolutionary record and set in motion the whole electro and Euro disco scene. Though futuristic in its sound and concept, curiously, the track belonged to the Casablanca album, ‘I Remember Yesterday,’ whose opening title song was slightly camp and the stylistic antithesis of ‘I Feel Love’ with its stylistic references to old time jazz and evocation of Hollywood’s glorious heyday in the 1930s. A key entry in Summer’s canon, the album – together with 1983’s ‘She Works Hard For The Money’ – has now been reissued as part of Culture Factory’s Vinyl Replica Collection and remastered in high definition.

‘I Remember Yesterday’s’ nod to the past didn’t begin and end with the title song but continued with ‘Love’s Unkind,’ an infectious homage to Phil Spector-produced girl group pop of the early ’60s and the crisp pop of ‘Back In Love Again.’ Different again – and further proof of Summer’s versatility during a time when she was typecast as a disco diva –  is ‘Black Lady,’ a collision of rock and funk flavours. By contrast, ‘Take Me’ finds Summer in a more typical dance floor mode while ‘Can’t We Just Sit Down (And Talk About It)’ reveals that the Massachusetts-born singer could bring an emotional gravitas to storytelling ballads. But it’s the album final cut, ‘I Feel Love,’ which is the album’s keystone, despite the fact that it stands out like a sore thumb because it sounds so different compared to what preceded it. It remains Donna Summer’s crowning achievement and changed the whole music landscape at the time – and its reverberations can still be felt in contemporary dance music.

By 1983, the disco bubble had burst and Donna Summer’s popularity was on the wane. She had left Casablanca under a cloud in 1980 and signed with the Geffen label but couldn’t recapture past glories. An album for Warner Bros (1982’s ‘Donna Summer’ helmed by Quincy Jones) followed and improved her chart fortunes but then the singer was ordered by a court to fulfil the terms of her original contract with Casablanca (which had then been acquired by Polygram) and give the company an album that she owed them. So in 1983, Summer went in the studio with composer/producer/pianist Michael Omartian and came up with ‘She Works Hard For The Money’ which Polygram decided to release via Mercury rather than Casablanca. It’s a slick, Hollywood-recorded album that shows Summer searching for a musical identity and a new direction in a post-disco world. The hit title song is a catchy and archetypal slice of ’80s pop-rock. ‘He’s A Rebel’ is even rockier and more anthemic while ‘Woman’ – one of the set’s best cuts – is a sassy chunk of Prince-esque funk. The biggest hit that the ‘She Works Hard For The Money’ album spawned was the upbeat, tropical-flavoured ‘Unconditional Love,’ featuring the UK’s own then juvenile reggae group, Musical Youth.

Sonically, these two albums – which come stylishly-packaged in sturdy mini LP sleeves complete with Japanese-style obi strips – have never sounded better in the CD age. They reflect two different junctures in Summer’s life and career – the first captures the singer at the height of her fame as a disco goddess while the second finds her reinventing herself and trying to find her feet in the brave new world of 1980s pop. Together, these albums reflect the versatile nature of Donna Summer’s unique talent.