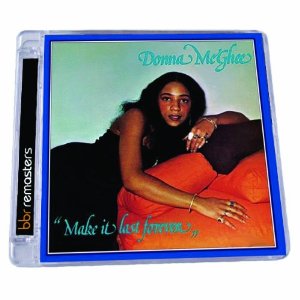 Coveted by crate-diggers and collectors of ’70s soul, this hard-to-find album by soulful chanteuse Donna McGhee is finally resurrected in the digital age via bbr, one of several Cherry Red soul imprints that is doing terrific work in relation to reissues of ’70s and ’80s albums. Gospel-reared McGhee began her career singing with the legendary Fatback Band in 1974 but left in ’77 and eventually started doing session work for noted producer/arranger Patrick Adams which culminated in a solo album deal under Adams’ supervision for the short-lived indie label, Red Greg’s Records, in 1978. What resulted was ‘Make It Last Forever,’ an album that was produced by Greg Carmichael with arrangements by Adams. Sonically, it had a deeper and funkier musical sensibility than most disco records from the same timeframe but failed to find any commercial success.

Despite not finding an appreciative audience at the time of its release, over the years the album has accrued a cult following. Consisting of five elongated tracks, it takes disco-soul to another level, presaging the mesmeric grooves of the early-’80s boogie scene. The set’s killer cut has always been regarded as ‘It Ain’t No Big Thing’ – which is also represented on this reissue by a 7-inch single edit as well as a contemporary re-edit by Danny Krivit – but the title track is also a tasty number, dispelling any notions that ‘Make It Last Forever’ is a one-track album. ‘Mr Blindman’ is also a strong, persistent tune, boasting an infectious chorus. The throbbing and more strident ‘I’m A Love Bug’ has a vibe that’s more in tune with early ’80s club records rather than orthodox late-’70s disco, illustrating that as a dance record, ‘Make It Last Forever’ was ahead of its time. Essential listening for disco students.