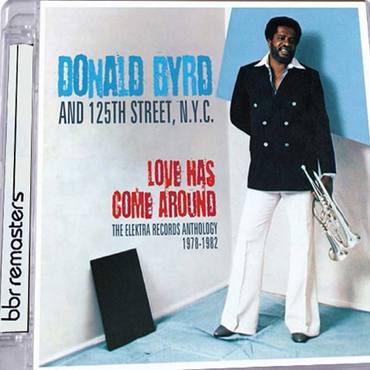 The late Donald Byrd was one of the biggest selling jazz artists in the 1970s. He hit the jackpot with the landmark album, ‘Black Byrd,’ for Blue Note Records in 1973, which found the Detroit trumpet maven joining forces with producers/writers Larry and Fonce Mizell to mastermind a commercial type of pop-fusion that was littered with catchy hooks and found favour with the wider general public. In the eyes of the jazz purists, though, Byrd had cynically sold out for commercial gain and when he switched from Blue Note to Elektra in 1978 and started chasing the disco dollar, they were even more enraged. It’s not hard to see why the jazz police saw Byrd’s defection to funk and pop as a heinous crime – after all, he’d been one of bebop’s brightest stars in the late 1950s and early ’60s. He was a virtuoso trumpeter and gifted improviser who had made a string of classic LPs for Blue Note before being seduced by fusion at the dawn of the ’70s. But if anything, Byrd – who was a feted academic as well as a musician – was an astute realist who saw that bop-based jazz was dying and tied his colours to the newly-emerging fusion mast. Purists cried ‘treachery’ but Byrd found a bigger audience for his musical endeavours as a result. And he produced some great music…but it wasn’t really jazz, at least not how the mouldy old figs viewed it.

This superb new double CD anthology focuses on Byrd’s most controversial period, when the trumpeter had renounced improv – the backbone of jazz – for fresh, funky, mirrorball grooves played by top session musicians (including Wah Wah Watson, Paul Jackson Jr, Greg Phillinganes and Ernie Watts). He cut four albums for Elektra – ‘Thank You…For F.U.M.L. (Funking Up My Life),’  ‘Donald Byrd And 125th Street N.Y.C.,’  ‘Love Byrd’ and ‘Words, Sound, Colors, And Shapes’ – all of which provide the source material for this 31-track set. Byrd’s biggest US R&B chart entry during this period was ‘Love Has Come Around,’  which with its pumping four-on-the-floor groove, catchy horn motif and soulful vocals is undoubtedly one of the highlights of this set. It was produced by Isaac Hayes, who also was responsible for ‘Sexy Dancer,’ the compilation’s vocoder-led, disco-fuelled, opener. Other notable dance floor material includes the romantic-themed ‘Loving You,’  ‘I Love You,’ and a funked-up version of Cole Porter’s classic jazz standard, ‘Love For Sale.’  If that upset the jazz purists, then so did Byrd’s revamp of his own classic mid-’60s tune, ‘Cristo Redentor,’ which is featured on the set’s ballad-heavy second CD. It gets a slick, mirrorball makeover complete with cooing female  backing vocals. Having said that, it’s one of the few tracks (the lovely ballads, ‘Marilyn,’ and ‘Everyday’ are two other examples) where Byrd gets to demonstrate his jazz chops with some elegant trumpet lines. But jazz, for the main part, is conspicuous by its absence in these here grooves – but if you appreciate this music for what it is and not for what it isn’t, then that shouldn’t matter. It’s a mighty fine collection of soulful jazz-funk that can still light up any dance floor.