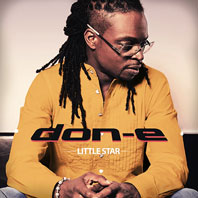 UK soul man Don-E returns to the fray with a relaxed 14 tracker that’s named for it’s opening track… and it’s easy to hear why ‘Little Star’ was given star billing. The tune is very catchy, easy on the ear and set at that sedate mid pace now favoured by modern soul folk. Sweet and sophisticated, it also sets the tone for much of the rest of the collection. Cuts like ‘Hold On’, ‘This Is It’, ‘He Ain’t Got My Style’, ‘Home’ and ‘BS’ are all built from the same DNA – with just the odd subtle variation. A cooed harmony here, a slightly slower pace there (‘This Is It’) and a rap on ‘BS’ (the rhymes-man, by the way is Ty). The bass-led ‘Hot Like My Summer’ would be my bet for the one that the modern soul dancers will go for though. It’s tight and crisp and right on the current vibe.

Despite all that, the album also offers plenty of variety. There’s a big beater in ‘It Just Don’t Stop’ and a surprising cover of Grace Jones’ ‘Slave To The Rhythm’. Don-E’s worked with the eccentric model/singer so feels qualified to tackle her classic… but what she makes of his almost housified tweak is anybody’s guess. There’s a trio of decent ballads too. ‘Incompatible’ is a tad ponderous; ‘Step In My Room’ features some fine harmonies; but ‘Good’ is the sweetest and shows Don-E at his most comfortable.

That then leaves two more noteworthy tracks. First, the cover of every soul fan’s favourite reggae song. Dennis Brown’s ‘Love Has Found It’s Way’. I guess Don-E grew up with the song since he’s really at home with it even though he takes the liberty of slowing it right down. Of course, he retains the beauty of the melody which quite transforms things. Better than the original? This famous fence-sitter will let you make up your own minds. Then there’s the album’s big set piece… and what will become ‘Little Star’s’ USP. It’s a sweet tune called ‘Spiritual’ and it’ll be remembered as the one that features a whole phalanx of Brit soul stars – Carl McIntosh, Junior Giscombe, Leee John, Noel McKoy, Omar, Paul Johnson and Rick Clarke. Despite the title, the track’s not gospel-based; rather it has a rather insinuating Stevie Wonder flavour and no one singer stands out. It could so easily have been over-egged but the crew behave like a proper team and create a fine track on what will at year’s end be credited as one of the best UK soul albums of 2013.