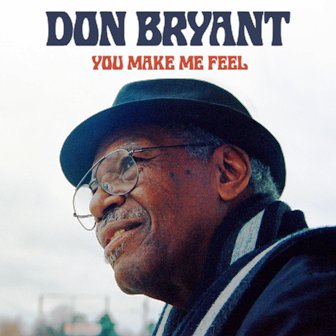 Don Bryant won’t mind being called a veteran soul man… he’s proud to say he’s pushing 80! But proper soul fans will know that and also know about Don’s remarkable career. They’ll know that he started his music odyssey in the church (there’s a surprise!) before joining a Memphis vocal group, the Four Canes who worked with a young horn player and his band. That ambitious band leader was Willie Mitchell and when Papa Willie started to record at Hi he turned to the Canes’ front man, Don Bryant to front the band’s vocal tracks … like the collectable and scintillating double A side, ‘That Driving Beat’/’Everything’s Gonna Be Alright’. The record is credited to Willie Mitchell, but it’s Don’s voice that grabs the attention! Mitchell had his singer record his own solo album too – 1969’s ‘Precious  Soul’ but as his solo career gained momentum, Don married fellow Hi artist Ann Peebles for whom he’d written her anthemic ‘I Can’t Stand The Rain’. A modern man maybe before his time, Don decided to take a back seat as Mrs Bryant’s career flowered. He continued to write songs and worked periodically in gospel but he was more than happy to put family commitments before his own career. It certainly worked. The pair are still together!

Ann retired in 2012 and Don started to do more and more gospel, then in 2017, with huge encouragement form Mrs B, he cut a new secular album… 2017’s ‘Don’t Give Up On Love’ which he described as “yesterday’s now music today…completely new but with an old soul.” That was a hugely accurate description and there’s more of the same on our man’s new platter ‘You Make Me Feel’ which, after a long wait, has finally been released on Fat Possum.

Helping Don concoct his delicious southern soul cocktail are members of the old Hi studio band... Charles Hodges (organ), “Hubbie” Turner (keys) and Howard Grimes (drums)  – all marshalled by producer Scott Bomar whose bass keeps things rock steady, like on the album closer, the jaunty ‘Walk All Over God’s Heaven’ – a reflection of Don’s gospel passion; then there’s the classic Memphis brass sound on ’99 Pounds’ . Like several of the inclusions here, that one is one of Don’s old songs revived for this album/ So too is ‘Don’t Turn Your Back On Me’ – a song Don originally recorded in 1965. Here he offers a slower more sombre version and like the sensational southern ballad, ‘A Woman’s Touch’, it’s an album highlight. Dip in anywhere, though, and Southern soul fans won’t be disappointed. Each track defines the genre and Don’s soul-fuelled, world-weary vocal proves that there really is no substitute for experience. ‘You Make Me Feel’ is only Don Bryant’s third long player in something like 60 years! As with experience, here’s proof positive that quality always scores over quantity!