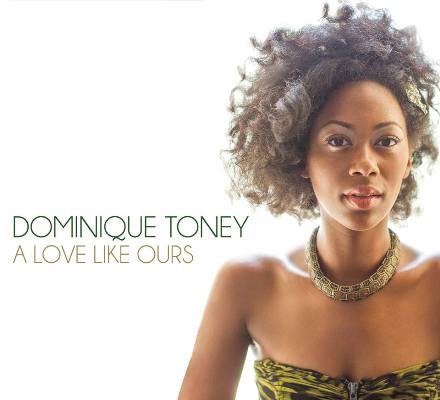 LA’s Dominique Toney has an impressive soul pedigree. Her father is keyboardist Kevin Toney – co-founder of the Blackbyrds, while her mother is a stage costume designer who’s worked with music royalty like Diana Ross and Paul McCartney. Between them, mum and dad ensured that daughter was given a thorough grounding in performing arts. Young Dominique quickly mastered the piano and enjoyed acting, songwriting and, above all else, singing. Recently graduated with a Collaborative Arts Degree from  New York University, the multi-talented Dominique has just released, this her debut album – produced, conveniently by dad, Kevin.

‘A Love Like Ours’ is a varied 12 tracker that father and daughter have put together to highlight Dominique’s rich, smooth soul voice. Standout track is the LP’s only cover – a take on Carly Simon’s ‘Vengeance’. It’s a big cut and features tight, ultra danceable beats though maybe the guitar parts are a touch too rocky to interest the modern soul crowd. They maybe more interested in the stately groove that is ‘We Are’. Elsewhere, well songs like ‘Loving You’s So easy’ and the title cut betray an interest in jazz while the loping ‘Moondance’ style groove that is ‘I Can’t Take That’ might have Van Morrison’s copyright lawyers reaching for the writs.

The album also features some pleasant ballads like ‘Hello There’ and ‘Blink Of An Eye’ but the big one is the closing ‘I Will Love Again’. This is Dominique’s Whitney moment and to be fair to the newcomer she has a great stab at the drama. Hedging her bets, Ms T also visits house territory with the pacey ‘In The Blink Of An Eye’ but the cut just lacks the polish that the top soulful house producers always bring to their work.

‘A Love Like Ours’ is an album of promise. It’s a solid debut but maybe Dominique and Kevin need to work on songs that are a little more memorable… songs that will do full justice to Ms Toney’s emotive voice.