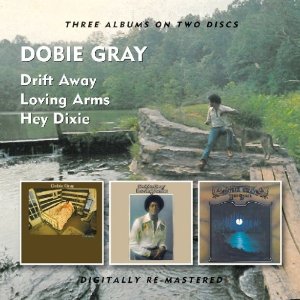 Dobie Gray died at the end of 2011 and despite his fame as the creator of two especially classic recordings (‘The In Crowd’ and ‘Drift Away’), he was always something of an enigma. For instance he never revealed (or indeed knew) his own real name. Some sources say he was born Lawrence Darrow Brown others claim his name was Leonard Victor Ainsworth; similarly there’s never been agreement on the time or place of his birth. Still, a little mystery never harmed a musician’s career and Gray went on to enjoy two distinct artistic trajectories. First, in the full flush of the age of classic soul he cut the anthemic ‘The In Crowd’ and the Northern soul defining sound ‘Out On The Floor’. Then, after a spell as a jobbing actor, in what appears a complete musical turnaround Mr Brown (or is that Mr. Ainsworth) “went country”. He decamped to Nashville and working with Mentor Williams he recorded the album ‘Drift Away’. Enhanced by the talents of the cream of Nashville’s session men, the LP’s lead single became a hit and the album spent several months on the long player charts. The same team recorded the follow up album – ‘Loving Arms’ and it enjoyed moderate success – hovering for a few weeks in the top 200; then in ’74 they cut a third collection ‘Hey Dixie’, which had slightly less impact. Complaining that the label (US Decca) didn’t know how to handle a black man singing country, Gray moved over to Capricorn but, again, the hits proved elusive and after spells with Infinity it appears he concentrated on song writing.

UK reissue label, BGO, has here collected Dobie’s first three Nashville albums and, packaged neatly and nicely across two CDs, everyone can try to work out why after the huge success of ‘Drift Away’ our man never again never quite scaled the heights. Was it (as he himself claimed) poor promotion by the label? Was it the possible musical oxymoron of a black man singing a white man’s music? Was it lack of decent material? Was it poor production? Well, we can’t discover how much work the label put in but we do know that black singers did become big county stars (Charley Pride for instance) and the material is all good – as is the playing and the production from Nashville’s A team. My contention is that Dobie peaked too soon. ‘Drift Away’ is just an outstanding tune (witness how many covers there have been) and bettering that was always going to be nigh on impossible. The song became the man’s albatross but grab your own copy of this “threefer” and you can make up your own minds.