DIPLOMATS OF SOLID SOUND: What Goes Around Comes Around (Record Kicks) 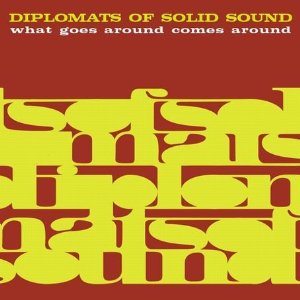 The Diplomats of Solid Sound are a five piece who hail from Iowa. They line up like this – Doug Roberson (guitar), Nate Basinger (Hammond), Paul Kresowik (drums), and Eddie McKinley and David Basinger (both sax). Between them they make a big, brassy funk sound – kind of half way between the Bamboos and the Dap Kings. This is their fifth album and they’ve chosen to work with the pro-active Italian label, Record Kicks, who’ve already made the band big across Europe and it’s easy to hear why. The band have a live, organic sound that engenders the feel good festival factor that works well in Continental Europe.

It’s rough, unsophisticated and takes no prisoners. Witness the energised opener, ‘B-O-O-G-A-L-O-O’ (the punctuation is all theirs) and it’s meant to emphasise the “bigness” of the sound. It’s a kind of a live party thing and the outfit’s backing duo – The Diplomettes (Sarah Cram and Kathy Ruestow) squeeze it for all it’s worth. Indeed the girls feature throughout the set working on a set of songs that are variants of that opener. ‘Fascination’ offers something a little different with a groove built around ‘Green Onions’, while ‘No Man’ has an uncanny Duffy feel to it. ‘Promise Of A Brand New Day’ and ‘I Can’t Wait For Your Love’ stray into Northern territory, while ‘Gimme One More Chance’ opens with a bizarre violin. ‘Bailout’ is the only full instrumental and it’s down and dirty – adjectives that could almost apply throughout. What this album lacks, methinks, is a little lightness – maybe a ballad … but perhaps the Diplomats, diplomatically speaking, don’t do those kinds of things. They know their sound and they stick to it. Good luck to them!