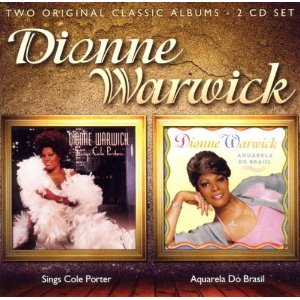 Soulmusic.com’s latest twin CD re-issue pairs two Dionne Warwick Arista oddities. Oddities in as much as that both LPs are “themed”, rather than collections of disparate songs which had been – till then – the lovely lady’s way. 1990’s ‘Sings Cole Porter’ was recorded at the suggestion of label boss Clive Davis who brought in the redoubtable Arif Mardin to produce. Dionne and Arif went into the studio and cut, we’re told, a jazz inflected set. But Davis wasn’t happy with it. He wanted something less complicated… lusher and more “vanilla”. The pair went back into the studio and did what “he who must be obeyed” wanted and the subsequent 12 tracker won a release but despite its elegance it meant little sales-wise. Listening now, it’s easy to hear why. The music is exactly as Clive Davis wanted – “vanilla”…. harsher critics might say “polite” or “bland”. Don’t get me wrong. Ms. Warwick is in superb vocal form and the arrangements are big and full, but they just don’t ignite or swing in the way people like Frank Sinatra and Nelson Riddle managed to get stuff like ‘I’ve Got You Under My Skin’ to swing . One track from the original “jazz” sessions was saved and tacked onto cassettes versions of the LP and it’s included here as a bonus. It’s a version of ‘Night And Day’ and features players like Grover Washington and Stanley Jordan whose guitar is a delight. Ms. Warwick sounds much more at home.

The second CD in the set offers 1994 ‘Aquarela Do Brasil’ – a much more convincing affair. Dionne Warwick had been infatuated by Brazil since touring there in the 60s and by the 90s she’d bought a home there. It was a logical thing, therefore, to cut a Brazilian themed LP and Clive Davis didn’t need much convincing. The pair’s enthusiasm for the album is evinced by the fact the 12 tracker was recorded in just two weeks – with another two for “sweetening”. The bulk of the material consists of contemporary Brazilian songs featuring top Brazilian musicians like Dori Caymmi and Oscar Castro-Neves. Then there’s a samba-school version of Duke Ellington’s ‘Caravan’ and two American songs – Brenda Russell’s ‘1,000 Words’ and Burt Bacharach’s ‘Captives Of The Heart’. That one (co-written by John Bettis) is easily as good as anything from the classic Warwick/Bacharach era and all fans should have it. Grab it here – along with lots of more complex, interesting stuff.