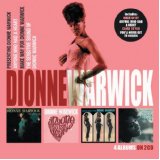 DIONNE WARWICK: ‘Here I Am,’ ‘Dionne Warwick In Paris,’ ‘Here Where There Is Love,’ ‘On Stage And In The Movies’ (Edsel 2-CD)

DIONNE WARWICK: ‘The Windows Of The World,’ ‘In The Valley Of The Dolls,’ ‘Promises, Promises,’ ‘Soulful.’ (Edsel 3-CD)

Dionne Warwick’s name is synonymous with musical elegance and stylish sophistication. Still going strong at the age of 73, the recently Grammy-nominated singer from East Orange, New Jersey, made her name in the 1960s with a slew of hits for Florence Greenberg’s Scepter label, including ‘Don’t Make Me Over,’ ‘Anyone Who Had A Heart,’ ‘Walk On By,’ ‘Message To Michael’ and myriad other memorable songs. Much of her material (including the four titles above) was written and produced by songwriting duo, Burt Bacharach & Hal David, who regarded the gospel-reared Warwick as the prime interpreter of their carefully-wrought, urbane, pop arias.

The UK’s BBC-owned Edsel reissue label has just licensed Warwick’s Rhino-owned Scepter and Warner repertoire for a series of chronologically-sequenced compilations that spans ten years (1963-1973) and includes sixteen freshly mastered albums complete with bonus tracks, detailed liner notes and lavishly illustrated booklets. The first set features Warwick’s first four albums released during 1963-1965 spread over two CDs; namely her debut LP ‘Presenting Dionne Warwick,’ alongside ‘Anyone Who Had A Heart,’ ‘Make Way For Dionne Warwick’ – which contains her biggest UK hit, ‘Walk On By’ – and ‘The Sensitive Sound Of Dionne Warwick.’  On these four sets, Warwick showed that she had maturity beyond her tender years and possessed a pliable voice with a nuanced delivery that could convey emotional drama with subtlety and without histrionics. She was performing pop rather than R&B but it was a sophisticated version of pop into which Warwick injected a soulfulness that she gleaned from her gospel background.

Warwick’s talent had blossomed even more by the mid-’60s, a period that is covered by the second set in the series and which features the 1966-1967 albums ‘Here I Am,’ ‘Dionne Warwick In Paris,’ ‘Here Where There Is Love’ – which was her biggest LP in the US R&B charts – and ‘On Stage And In The Movies.’ Hits present from this period include ‘Trains And Boats And Planes,’ ‘I Just Don’t Know What To Do With Myself,’ ‘and Alfie.’ The live in Paris album documents the effect that Warwick’s music was having on European audiences while ‘On Stage And In The Movies’ finds the singer expanding her range and repertoire by covering tunes from musicals and Hollywood films (and not a Bacharach & David song in sight).

The third Edsel compilation is a digipak-style 3-CD set devoted to albums from the latter half of the ’60s:  ‘The Windows Of The World,’ ‘In The Valley Of The Dolls,’ ‘Promises, Promises,’ and ‘Soulful.’ In terms of hits, the set contains ‘I Say A Little Prayer,’ ‘Do You Know The Way To San Jose,’ ‘Promises Promises’ and ‘This Girl’s In Love With You’ (the latter was Warwick’s distaff US hit version of the Bacharach-David song that Herb Alpert immortalised in 1968). Of the three albums, the fourth, 1969’s ‘Soulful,’ is arguably the most interesting as it finds the singer producing herself in Memphis with the estimable Chips Moman assisting. The material ranges from three Fab Four tunes – including ‘ A Hard Day’s Night’ reconfigured as a slow blues – to the Righteous Brothers ‘You’ve Lost That Lovin’ Feeling,’ the Ashford & Simpson-penned ‘You’re All I Need To Get By,’ Curtis Mayfield & The Impressions’ ‘People Get Ready,’ Otis Redding’s ‘I’ve Been Loving You Too Long,’ and Aretha’s ‘Do Right Woman – Do Right Man.’ It’s a bit of a mixed bag in terms of its material but Ms. Warwick certainly shows that working with Bacharach & David hadn’t whitened her soul. Appended to this album from the same timeframe are 13 bonus cuts (this set as whole actually contains a whopping twenty-two additional non-album tracks). These include covers of tunes such as The Band’s ‘The Weight’ and Sly Stone’s ‘Everyday People,’ which show the singer courting a hipper – and blacker – audience. Also notable is the singer’s lovely take on Donny Hathaway’s poignant ‘Our Ages Or Our Hearts,’ a song that Roberta Flack recorded on her ‘First Take’ album.

The fourth volume in Edsel’s Dionne Warwick retrospective series is a 2-CD set that chronicles Warwick’s move from Scepter to Warner Bros. It contains the Scepter albums ‘I’ll Never Fall In Love Again’ and ‘Very Dionne,’ and concludes with her first two Warner long players, ‘Dionne,’ and ‘Just Being Myself.’ 1970’s ‘I’ll Never Fall In Love Again’ finds the singer under the aegis of Bacharach-David again after the departure represented by the previous year’s ‘Soulful.’ The title track was the biggest single from the album, though ‘Let Me Go To Him’ also charted in the USA and the set includes Dionne’s take on George Harrison’s ‘Something,’ Jimmy Webb’s ‘Didn’t We’ and a somewhat misjudged cover of Frank Sinatra’s ‘My Way.’ Bacharach & David remained on board for ‘Very Dionne’ but it only yielded one charting single, a duet of ‘Make It Easy On Yourself’ with B. J. Cole. It’s a solid offering, though, with Warwick sounding supremely impressive on a mixture of Bacharach-David songs, musical/show tunes, easy listening numbers and pop covers.

But with the exception of a soundtrack album – 1971’s ‘The Love Machine,’ from which some tracks can be found among the bonus tracks – ‘Very Dionne’ was Ms. Warwick’s swansong for Scepter.  In 1971, she inked a deal with Warner Bros for a reported $5 million and inevitably hooked up with her long-time confreres, Messrs Bacharach & David for ‘Dionne.’ That particualr album was an abject commercial flop but is – at least to this writer’s ears – an underrated gem in the singer’s catalogue and includes the delightful ‘Hasbrook Heights.’ Sadly, Bacharach & David had split up by the time that Warwick was due to cut her next album, ‘Just Being Myself,’ and she turned to the ex-Motown triumvirate, the esteemed Holland-Dozier-Holland, though their songs and presence couldn’t stop the album from bombing big time. Though both parties weren’t at their very best, it is nevertheless an underrated and intriguing confection that stylistically is radically different to what Warwick had recorded with Bacharach & David. The highlights include a slice of gritty psych-soul called ‘You’re Gonna Need Me’; the funkafied title cut that features jazzy flute lines; the dramatic ‘I Think You Need Love’; and the delicate ballad, ‘You Are The Heart Of Me’ (an Eddie Holland co-write whose arrangement doffs its cap to … Bacharach & David). The album’s undoubtedly not had the exposure it deserves and hopefully will now find a wider audience as a result of Edsel’s reissue series.

There’s a lot of music to digest here, especially if you decide to shell out for the whole set, though you won’t need to remortgage your house to acquire them as the 2-CD sets can be found online for under £10 (and the 3-CD volume is only a tad dearer). Together they provide a vivid overview of a phenomenal first decade in the career of one of the most significant and distinguished female voices in the history of popular music.