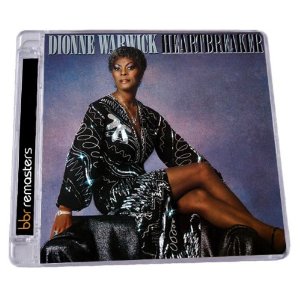 bbr continue their programme of reissuing Dionne Warwick’s Arista albums with 1982’s ‘Heartbreaker’ – a huge landmark in Ms W’s career. Arista boss, Clive Davis, of course, revitalised the career of New Jersey’s finest when he brought her to his label after the doldrums of her stint with Warner Bros and for her fifth Arista LP he brought in the Bee Gees to work with her. The Gibb brothers provided most of the material for the album while, more specifically, Barry Gibb (a self-confessed Dionne Warwick fan) was given the producer’s role which he was eventually happy to share with old collaborators Karl Richardson and Albhy Galuten. That trio’s collective CV included work at Miami’s Criteria Studios, Memphis sessions for Atlantic Records, hits for Frankie Valli, Terri DeSario and Samantha Sang as well as Barbra Streisand’s hugely successful ‘Guilty’ album. With a pedigree like that the Warwick collaboration couldn’t fail… and, of course, it didn’t!

The ‘Heartbreaker’ album was a hit in the US and UK while the title song went top 10 pop Stateside and climbed to no. 2 in Britain. That landmark cut though isn’t the only thing of note on the long player. For starters there’s the emotionally charged ‘Yours’, the attitude-laden ‘Take The Short Way Home’, and ‘I Can’t See Anything But You’ – the Gibbs boys attempt to write in the style of Burt Bacharach. Add to those ‘All The Love In The World’ – another top 10 hit – and you have the core of an excellent LP. The album’s only cover is a gentle remake of Ruby and the Romantics’ ‘Our Day Will Come’. New York music folk lore had it that a young Dionne Warwick cut the original demo of the song back in 1963 – so a nice touch for her to have the opportunity to do a “proper” version.