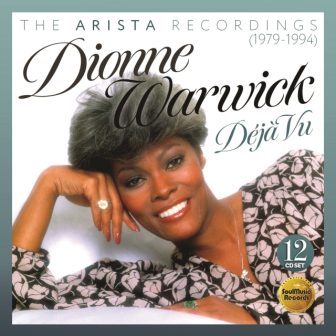 To most, Dionne Warwick will forever be remembered for her time at Scepter/Wand where, working with Burt Bacharach and Hal David, she crafted countless, timeless soul and pop classics. Genuine Warwick fans, however, know and revere her time with the Arista label which she joined after a short post-Scepter tenure at Warner Bros. Dionne was with Arista for 15 years (longer than at Scepter) and during that time she enjoyed her most commercially successful period and her faithful followers will tell you that many of her very best recordings were made for Arista.

We can all test that assertion with consummate ease via this wonderful 12 CD box set just released by David Nathan’s Soul Music Records in collaboration with Cherry Red. The box contains all of Ms W’s Arista albums – beginning with 1979’s eponymous LP and ending with 1994’s ‘Aquarela Do Brasil’ and, as is the way with box sets, there are plenty of bonus cuts appended to each disc.

With such a treasure trove, it’s hard to know where to begin. Maybe we should start with 1982’s ‘Heartbreaker’ LP. With over 3 million sales, this is easily Warwick’s most successful album. Largely crafted by the Bee Gees, the title track remains fresh and vital while the bonus cut here is a Dionne demo duet with Barry Gibb on the evergreen ‘Let It Be Me’. Apart from the Gibb boys, Warwick worked with plenty of other big name producers/artists at Arista… none bigger than Luther Vandross. Vandross got to work with one of his inspirations and soul heroines on ‘How Many Times Can We Say Goodbye’ and though the ’83 LP didn’t quite ignite throughout as fans had hoped it did at least yield the amazing ‘So Amazing’ and the lovely ‘What Can A Miracle Do’.

Amongst other collaborators during the Arista period are Barry Manilow, Smokey Robinson, Johnny Mathis, Kashif, Jeffery Osborne and our own Lisa Stansfield. Lisa and her husband, Ian Devaney, worked with Dionne on some of the cuts on 1993’s ‘Friends Can Be Lovers’ album – a particular favourite with avid Warwick fans. The title cut is often cited as one of Ms W’s very best. And speaking of “best”, the song ‘Extravagant Gestures’ (from 1985’s ‘Friends’ set) is regularly voted as the lady’s most sensitive/soulful recording on fan forums… but this box includes plenty that could secure the “very best” accolade. I mean any takers for – ‘Déjà Vu’, ‘Love Power’, ‘Run To Me’ or ‘That’s What Friends Are For’ (with that famous guest list, of course)?

We’ve just said this is a treasure trove… for sure it is .This review has just scratched the surface. There’s just so much here that deserves attention and as a bonus the extensive sleeve notes come via David Nathan, a long time friend of Dionne. His incisive words will guide you onwards an upwards!