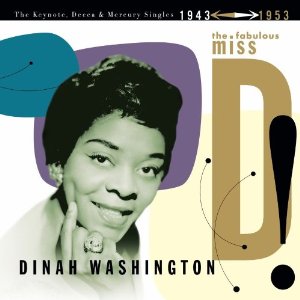 Though she had a relatively short recording career, Dinah Washington (1924-1963) proved to be a profoundly influential singer – those who fell under her spell included Esther Phillips, Nancy Wilson, Aretha Franklin and in more recent times – perhaps surprisingly to some – Amy Winehouse. Indeed, the controversial UK singer cites Washington as a major influence on her own bluesy, retro-tinged style.

Though she became renowned for her extravagant lifestyle and diva attitude after reaping success, Dinah Washington had humble origins and began life as Ruth Lee Jones in Tuscaloosa, Alabama. She honed her vocal skills singing gospel hymnals in the ranks of the Sallie Martin Gospel Singers in the early 1940s before joining vibraphonist Lionel Hampton’s band as a featured singer in 1943 (by that time she had left Ruth Jones behind, morphing into Dinah Washington at the suggestion of a nightclub promoter). The valuable exposure she received by working for Hampton opened the door for her as an artist in her own right and from 1943 up to 1961, Washington – who became known as the ‘Queen of the Blues’ – racked up an incredible 47 chart smashes on Billboard’s R&B chart, including five number ones. For the first time ever, Hip-O-Select have gathered together all of the singer’s early 78-rpm singles – recorded for Keynote, Decca, and Mercury- on a new, lavishly-packaged and superbly-annotated 4-CD box set called ‘The Fabulous Miss D!‘ Comprising a whopping 107 tracks, it spans the years 1943-1953, an immensely fertile period in the chanteuse’s short career.

There’s so much good music on this chronologically-sequenced compilation that it seems almost akin to nitpicking to focus closely on individual highlights. Of course, some of Washington’s notoriously risqué numbers are worth singling out – ‘Long John Blues, for example,’ with its thinly-veiled sexual metaphor (relating to a dentist’s drill and cavity-filling no less) is absolutely hilarious and still hits the spot (both musically and lyrically) 61 years after it was first released. There aren’t many singers who can get away with singing the line ‘He took out his trusty drill and told me to open wide.’ Other great cuts on the set include Washington’s first chart entry, 1944’s ‘Salty Papa Blues,’  ‘Am I Asking Too Much’ (the first of her five R&B chart toppers), and her wonderful take on Fats Waller’s ‘Ain’t Misbehavin’.’ Other key tracks featured are ‘Cold, Cold Heart ‘ – her seminal R&B retooling of Hank Williams’ famous country song – plus ‘I Wanna Be Loved,’ ‘Wheel Of Fortune,’ and ‘TV Is The Thing (This Year).’ Whether she was singing a torchy, sensuous, ballad or riding a swinging, finger-snapping groove, Washington always showed total commitment and superb interpretative skills, imbuing her material with passion and sensitivity.

In his autobiography, the legendary arranger and record producer Quincy Jones said of Dinah Washington (with whom he worked in the 1950s): “She could take the melody in her hand, hold it like an egg, crack it open, fry it, let it sizzle, reconstruct it, put the egg back in the box and back in the refrigerator and you would’ve still understood every single syllable.” This amazing collection reaffirms the veracity of Jones’ assertion. Dinah Washington was a unique singer and charismatic performing artist whose very musical essence is embodied in the wonderful music that can be found in this scintillating retrospective. The perfect Yuletide gift for serious students of vintage rhythm and blues.