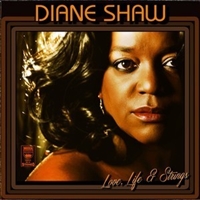 Such is its attention to detail – in terms of its grooves, orchestrations, melodies and even song structures – that this remarkable UK-produced debut album from Diane Shaw sounds like a lost artefact that’s been languishing in Motown’s vaults for forty-five years. Having said that, it’s much more than a hollow pastiche that pays tribute to soul music’s golden era in the 1960s. In an age when contemporary soul music seems plastic and soulless to a lot listeners – especially in Great Britain where ‘real soul’ is championed –  Ms. Shaw has created an album that finds a ready-made market in the shape of the UK’s Northern and Modern soul scenes, who will hungrily lap this up.

‘Life, Love & Strings’ is an album where substance goes deeper than style and whoever was behind the production, songwriting and orchestration has certainly done their homework, recreating the Detroit hit factory’s musical DNA with total accuracy and authenticity. Despite this, there’s nothing remotely second-hand about these songs, though, which are uniformly strong throughout this 14-track set.

It seems churlish, perhaps, to single out individual cuts as the set is consistently engaging from start to finish. When it comes to the nitty-gritty, though, arguably the set’s killer cut is the anthem-like ‘That Thing You Do,’ a churning uptempo mood-groove with a ’70s vibe that recalls Holland-Dozier-Holland’s Invictus repertoire. It’s probably already a Modern Soul scene floor filler. By contrast, the brilliant, Motown-esque floater, ‘Leave A Little Love’ – once recorded by Lulu – is rendered like a lost Brenda Holloway cut. ‘Don’t Promise Me Sunshine’ has a perceptible uplifting gospel feel while ‘Never Been Hurt’ is a sweetly soulful shuffle with a sax solo and the brisk ‘You Let Him Get Away’ takes us back to Motown’s halcyon days as does, ‘Good Lovin’ Man,’ a Hitsville-style stomper. There are good ballads, too, exemplified by ‘These Tears Are Real,’ and there are also covers of Merle Haggard’s Bettye Swann-associated ‘Today I Started Loving You Again’ and Aretha’s immortal ‘Say A Little Prayer.’

The nostalgic, feel-good vibe that imbues ‘Life, Love & Strings’ is infectious and though there might be some listeners who feel that they’ve heard it all before, you can’t knock the sheer quality of Diane Shaw’s assured vocal performances, her choice of material and the arrangements. They’re all first class – which pretty well sums up the album as a whole. Great stuff – and it’s destined to be regarded as one of the best soul LPs of 2015.