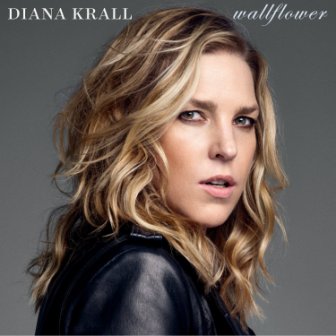 ‘Wallflower’ is multi Grammy-award winning Diana Krall’s 12th album and though some “serious” jazz reviewers have dismissed the 16 tracker as too poppy, the set actually complements the 11 albums in her catalogue. Mrs. Costello has done “straight” jazz (if such a thing exists), regularly visited the great American song book, dallied with Latin flavours and even dabbled with 30s and 40s nostalgia… so why not tackle some great pop songs… songs that she was familiar with in her formative years and which must have had some sort on impact on her? To help her deliver she’s brought in David Foster who brings a string-heavy lushness to some familiar songs and the result is, I’d suggest, an album as personal and eclectic as anything she’s previously delivered.

Generally, the selected songs are lovelorn ballads stuffed with melancholy and Ms Krall’s mellow and languid delivery is perfectly suited to that mood. Chosen titles range from the Mamas And Papas’ ‘California Dreaming’ to Elton John’s ‘Sorry Seems To Be The Hardest Word’ and from Crowded House’s ‘Don’t Dream It’s Over’ to Bob Dylan’s ‘Wallflower’ –the song that gives the LP its title. Diana also chooses two tunes from the Eagles’ catalogue – ‘Desperado’ and ‘I Can’t Tell You Why’. The latter is an album highlight – it’s just a great melody, isn’t it? The two other standouts are treatments of 10CC’s ‘I’m Not In Love’ and Gilbert O’Sullivan’s ‘Alone Again Naturally’. The former is generally considered a humble if clever pop tune while the latter is often dismissed as trite and over-sentimental. These new versions will, I’m sure, make the critics think again. Krall’s low, sensuous delivery brings the maximum sadness out of both songs. Michael Bubble guests on ‘Alone Again Naturally’ and his contribution will, again, surprise his critics.

Other album guests include Bryan Adams on Randy Newman’s ‘Feels Like Home’ and Georgie Fame who adds his usual laconic swagger to Ms K’s version of his ‘Yeh Yeh’ – one of the albums few “up” moments. The album’s only new song comes courtesy of Paul McCartney. Diana worked with Sir Paul on his ‘Kisses On The Bottom’ album and we’re told that one of the songs discarded was ‘If I Take You Home Tonight’. Rather than let it languish McCartney allowed Ms Krall to record it and here it is – one pleasing surprise amongst many.