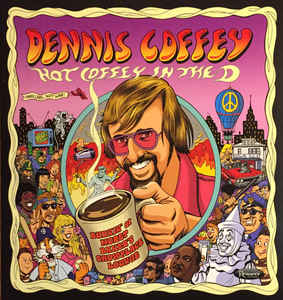 Dennis Coffey is a guitar legend. He was a key member of Motown’s Funk Brothers, playing on countless hits. His is the distinctive wah-wah sound that marked the so called psycho-soul period of the Temptations’ career but he’s also revered by rare groove fans for his solo outings – notably the oft-sampled ‘Scorpio’ and the soundtrack, ‘Back Belt Jones’. Like many of the Funk Brothers, Denis augmented his pay packet by playing the Detroit music bars and night clubs and a few years back, Dennis dug out an old, forgotten tape of one of his gigs at such a club. Club in question was the tiny Morey Baker’s Showcase Lounge and the date of the recording was “sometime in 1968”. At that time, the guitar man led a trio; the two other members were organist Lyman Woodward and drummer Melvin Davis. Both were “names” on the Detroit session scene, working with people like Don Davis and Ed Wingate.

Sonically the bill of fayre is soul-jazz, though with Coffey leading there’s a generous helping of funk too. The funk’s there on the original tunes, ‘Fuzz’ and ‘The Big D’ and fans of Dennis’s ‘Scorpio’ period will relish both.

The remaining five tracks are covers with the most interesting being reconstructions of Jimmy Webb’s ‘By The Time I Get To Phoenix’ and Burt Bacharach’s ‘The Look Of Love’. On the former, the trio raise the tempo while on the latter, the influence is Wes Montgomery. The other covers – ‘Wade In The Water’, Herbie Hancock’s ‘Maiden Voyage’ and Ruby Johnson’s ‘Casanova’ – are truer to their better know versions. Interestingly, the comprehensive sleeve notes reveal Coffey played on that Andrews track!

As an album bonus, the sleeve notes are excellent. Interviews with Coffey and Detroit insiders, including Bettye Lavettte, offer a real insight into the Detroit music scene of the mid 60s.