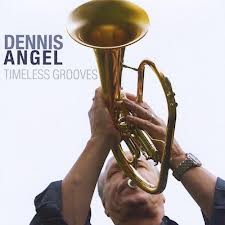 New York-based, Dennis Angel is a practising lawyer… he specialises in the movie business. He’s also an accomplished trumpet player who was once offered a place at the Juilliard School and over the last couple of years he’s issued several singles, some of which, like the tongue-in –cheek ‘I Need Smooth Jazz’ – became big radio hits. Encouraged, Dennis had just released his first album.

Produced by hot shot Jason Miles, the album ‘Timeless Grooves’ is a classic smooth jazz set –despite the irony Angel expressed in that single. The gentle paced ten tracker contains all the elements that constitute the typical smooth jazz long player. For starters there’s the soul-based dance grooves. The best here is the opening ‘Forever Funk’ which, it has to be said, is polite rather than raw. Then there’s the obligatory Latin flavours – most obvious one here being ‘Rio On My Mind’. For those quieter moments there’s ‘The Breeze’ and don’t forget the Kenny G and Najee effect. Here Dennis does a Kenny G on The Beatles ‘Norwegian Wood’.

All classic smooth sets need a clutch of vocals too and here we’re treated to four. Two of that quartet feature the soloist’s daughter, Rebecca Angel. She does an easy-on-the-ear job on ‘A Song In Harmony’ and a cover of ‘Can’t Help Falling In Love With You’. Both are very, very bland and quite different to the two other vocal tracks. They belong to big baritone DeForest Raphael and they’re quite odd. The first is a patriotic hymn – ‘I Did All This’, which sounds like it has strayed from a 50s musical –but, of course, it hasn’t. The second is a sort of quasi-operatic rap called ‘From Bebop To Hip Hop’. It’s a clever concept. The idea is to connect jazz to rap but it doesn’t quite work and with lyrics like “You know I’m not a rapper, though some call me dapper. Just trying to add some jazz to this new razzmatazz” you can maybe understand why. That said, Mr A plays some decent horn on the cut… and that seems to be the problem. There’s no doubting Dennis Angel’s prowess, he just needs some beefier material on which to display it.