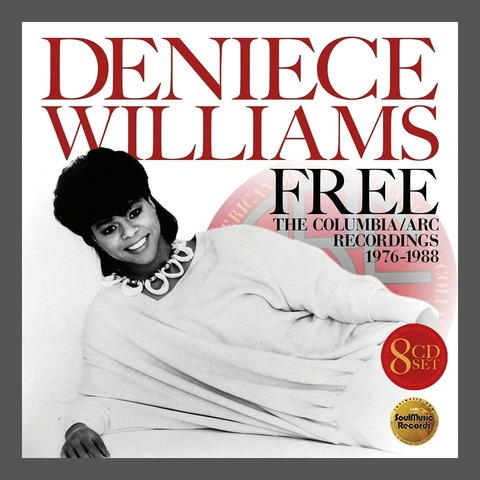 Originally from Gary, Indiana, Deniece Williams celebrated her 70th birthday earlier this month; a noteworthy personal milestone that coincides with the release of this tremendous 8-CD retrospective from David Nathan’s redoubtable SoulMusic label.

Born Deniece Chandler and raised on gospel music, Williams cut some indie singles under her birth name for the Chicago-based Lock and Toddlin’ Town labels between 1968 and 1970 before joining Stevie Wonder’s background vocal group Wonderlove in 1972. She stayed with them for three years before Earth, Wind & Fire’s main man, Maurice White, helped her get a deal with Columbia Records. She remained at the monied major label for twelve years, during which time she released eleven albums, which are brought together in ‘Free: The Columbia/ARC Recordings.’

For this writer, Williams’ debut LP, the Maurice White-produced ‘This Is Niecy’ – which opens the box set – is a uniformly brilliant album that sounds as fresh now as it did back in 1976. Its undoubted keystone is  ‘Free,’ a big transatlantic soul hit that highlighted Williams’ ethereal voice and which quickly became her signature song. 1977’s ‘Songbird’ – an excellent but underrated album also helmed by White – followed a similar stylistic trajectory but wasn’t as successful but in 1978, she scored a US pop and R&B chart-topper with ‘Too Much, Too Little, Too Late,’ a duet with the legendary crooner, Johnny Mathis. It came from the pair’s gold album ‘That’s What Friends Are For,’ also included in the box set.

After that, Williams worked with several different producers, who created different backdrops for her angelic voice: there were Ray Parker Jr and David Foster behind ‘When Love Comes Calling’; Thom Bell on two albums, ‘My Melody’ and ‘Niecy’; and George Duke on ‘I’m So Proud’  and ‘Let’s Hear It For The Boy.’ The latter album’s title track featured on the soundtrack to the 1984 movie Footloose and consequently became a massive global hit. (In the US it was both a pop and R&B No. 1). With its drum machines and synthesisers, ‘Let’s Hear It For The Boy’ was a far cry from the singer’s organic approach in the late ’70s but it took her music to a wider, more pop-oriented demographic.

The pop-meets-R&B slant and mechanised production sound continued on Williams’ final three albums; ‘Hot On The Trail,’ ‘Water Under The Bridge’ (masterminded by Culture Club’s producer, Steve Levine) and ‘As Good As It Gets, which yielded the Motown-esque dance hit, ‘I Can’t Wait.’ The latter album featured production by the ex-Time member and expert ballad writer, Monte Moir, responsible for  Alexander O’Neal’s ‘If You Were Here Tonight”; Moir brought a distinctive Minneapolis vibe to the album on several cuts, including the haunting ‘All I Need’ and ‘It’s You I’m After.’

The final disc in the box set is devoted to bonus material; numerous single versions and extended 12″ mixes that should satisfy collectors. As you’d expect from SoulMusic, the package includes a substantial, photo-packed booklet containing lengthy liner notes that include new quotes from the singer and some of her backroom team.

‘Free’ is an impressive monument to an extraordinary career. It functions like a time machine that transports the listener back to 1976, the year when Deniece Williams’ career took off; from there, it takes us on a journey through a variety of different musical landscapes and production styles.  The only constant is Deniece Williams’ unmistakable voice; a honeyed but soulful and deeply spiritual instrument that sadly is silent today. (Her last album came out fourteen years ago).  While her many devotees patiently wait for the singer’s next musical chapter, this superlative compilation reminds us of her formidable talent.