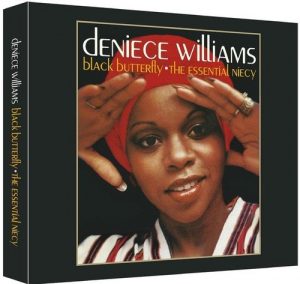 Though Deniece Williams’ solo career exploded big time in 1976 when Earth, Wind & Fire’s Maurice White took her under his wing and helped get her a deal with Columbia, her first shot at solo stardom came much earlier in the late ’60s and early ’70s when she issued a clutch of forgotten 45s for several small indie labels under her maiden name, Denise Chandler. The singles didn’t make a lot of noise but one of them, ‘Love Is Tears,’ was heard by none other than Stevie Wonder. As a result, she got to audition for his troupe of backing singers, Wonderlove, in 1972 and went on tour and recorded in the studio with the blind genius during the next three years. Wonder was so generous that he allowed her a few fleeting minutes in the spotlight on her own during his concerts and that’s when Maurice White got to hear her. On that particular occasion White heard Williams showcase one of her own songs, ‘Free,’ which convinced him to produce her. It began a thirteen-year association with Columbia Records that catapulted the singer with the ethereal voice to fame and garnered her a string of memorable hit records. That period – undoubtedly the most fertile in her long career – is chronicled by this stupendous new 2-CD compilation, which as well as presenting remastered tracks includes a liner note essay packed with quotes from Williams and some of her musical associates (it also features a heartfelt foreword written by Johnny Mathis, who enjoyed some hit duets with the singer).

But ‘Free’ was where it all began for Deniece Williams and it’s no surprise that this 35-track set starts with the classic anthem that for many people (this writer included) was their first introduction to the singer from Gary, Indiana (which, of course, was also the town that gave us the Jackson family). White was the perfect producer for Williams, finding her great tunes, putting her with top-flight musicians and framing her celestial tones with classy arrangements. There are several selections for the two excellent albums White helmed for her (‘This Is Niecy’ and ‘Song Bird’) plus tracks culled from solo albums she cut with Ray Parker Jr, David Foster, and Thom Bell (‘It’s Gonna Take A Miracle’) in the late ’70s and early ’80s as well her Jack Gold-produced duets project with Johnny Mathis, which yielded the 1978 US R&B chart topper,  ‘Too Much, Too Little, Too Late.’

The second disc in the anthology fast forwards to 1984, when Williams topped the charts around the world with the George Duke-helmed ‘Let’s Hear It For The Boy’ (the extended mix is featured on this collection).  By that time, R&B had entered the brave new world of early digital technology and drum machines, sequencers and synths ruled the roost. As that track – and others like it – show, Williams was able to adapt to changing styles and tastes without losing her uniqueness and inherently soulful quality. Other big hits from this era included the pop-oriented, ‘Never Say Never’ (the 12-inch version is present here), and ‘I Can’t Wait.’ Further standouts come in the shape of the excellent groove ballad, ‘Do What You Feel’ (a pre-‘Let’s Hear It For The Boy’ George Duke-produced cut), the aspirational affirmation, ‘Black Butterfly,’ the funky ‘Next Love,’ and the lovely Monte Moir-helmed ballad, ‘All I Need.’

After leaving Columbia, Williams returned to her gospel roots, focusing on inspirational music though more recently has released secular material again. This superlative, attractively-packaged, compendium takes us back to the singer’s glory years, showing us how the small town girl from Gary, Indiana, really did blossom into a black butterfly and became one of the biggest and most beautiful-voiced soul singers on the planet.