DELVON LAMARR ORGAN TRIO; I Told You So (Colemine) 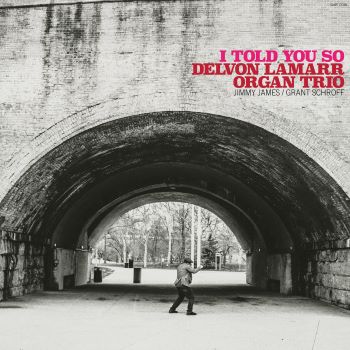 The Delvon Lamarr Organ Trio have been around since 2015 but despite having released two albums we’ve only been aware of them via a couple of cuts on compilations. Craig Charles championed a tune of theirs, ‘Ain’t It Funky Now’ while a recent Colemine label compilation offered their take on Marvin Gaye’s ‘Inner City Blues’ Those two titles should suggest the sound of the band – yes heavy, funky and soulful.

Band leader is, obviously, organ grinder, Delvon Lamarr. His sidekicks are guitarist Jimmy James and drummer Dan Weiss. Lamarr numbers amongst his heroes Jimmy Smith, Booker T and Baby Face Willette while James cites Steve Cropper and Grant Green as key influences. For his part Weiss learned his licks behind the kit in soul and funk outfit, the Sextones. Again, that info should indicate where the trio are coming from. They call their sound “feel good music” – an amalgam of soul-jazz, Stax sounds, the sparse funk of bands like the Meters and a sprinkle of Motown to give their music instant accessibility. And all that’s here on this, their third long player (but their second studio set) ‘I Told You So’.

The nine tracker offers exactly what Delvon and the boys say they create … “feel good music”. No long, self-indulgent jams for these guys. Their music’s tight and hits you right between the eyes. Try the sparse funk of ‘Fo Sho’ to get the full flavour. That funk is echoed on ‘I Don’t Know’ and ‘Right Place, Right Time’. ‘From The Streets’ is a bluesier, meaner affair with James’ guitar echoing his hero, Steve Cropper’s sound. ‘Call Your Mom’, the album opener, is a tight soul-jazz offering that could’ve been recorded in the 60s while the gentle and melodic ‘Girly Face’ evokes the spirt of people like Billy Larkin and Richard “Groove” Holmes. Back in the day no decent, organ-led soul jazz set would be complete without a big cover version and here Delvon and gang offer a take on George Michael’s ‘Careless Whisper’. An odd choice, maybe, but here they draw out all the inherent melancholy whilst retaining the familiar melody lines. It may be more Booker T and the MGs than Jimmy Smith, but it works… a proper 60s throw back, as indeed is the cover art and typography which evokes some of those classic black and white Blue Note 60s album covers.