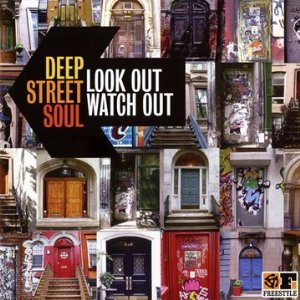 Over the last couple of years Australia has produced a good number of soul and funk bands, amongst them Melbourne’s Deep Street Soul. The band were founded in 2008 and at its core are Monique Boggia (keys) , Papa J Hunter (bass) , Agostio Soldati (drums), Neil Boland (guitar) and vocalist Mighty May Johnston, though, oddly maybe, on a couple of the tracks here the band welcome guest vocalists Randa Khamis and Roxie Ray. Ray, who’s worked with Dojo Cuts and the Liberators, features on the album’s “odd-man-out” track … the closer, ‘Fallin’. This one’s a bluesy, slow burner with a feel of the Amy Winehouse’s about it. Maybe Ms. Ray was drafted in ‘cos Ms Johnson couldn’t quite get that laconic, blowsy Winehouse sound. She does though acquit herself admirably on the cuts which call for the lung bursting, gritty rock and funk approach. They are the heavy ‘What She Said’ (shades of Hendrix about the slashing guitar sound) and the wild, undisciplined ‘Make Everything All Right’. The album’s other big vocal features the aforementioned Randa Khamis (you may remember Randa and the Soul Kingdom?) … and it’s a cover of the squirming funk perennial ‘Sweetback’.

Elsewhere the album’s crammed with instrumentals, with the core quartet augmented by a brass section. The tunes are a mix of funk, soul-jazz and Stax soundalikes. The best of the bunch is the Booker T inspired ‘Fat Traps’, though ‘Not Enough Down’ will appeal to Hammond freaks too. Sadly, it’s all a bit too much of the same with the only lightness coming at the end with that ‘Fallin” track that I mentioned up top. Hence my describing it as “the odd one out”. Still, the band offer commitment and enthusiasm and when they manage to get all that properly marshalled with a sympathetic producer, Deep Street Soul will be worth watching out for.