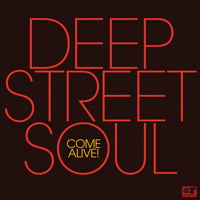 Deep Street Soul is an Australian funk combo that shares the same aspirations and influences as bands like Sharon Jones and the Dap-Kings. ‘Come Alive’ is their third full album and like the first two, it’s a hard-driven, uncompromising affair. Of that you’re left in no doubt with the opening track – an unbridled, undisciplined instrumental jam called ‘Out Of The Gates’. It’s cacophony personified and it may well turn gentler souls off the rest of the album… even if you persevere, though, there are few hiding places from the raw funk.

‘Deux Freres’ and ‘Big C’ are both grinding instrumentals – thankfully a little more structured than ‘Out Of The Gates’, while ‘Little Ray’ and ‘The Hardest Part Is Knowing’ offer more of the same with the addition of vocals. The singer on both is the band’s lead, May Johnson and it doesn’t take long to learn why she earned the nickname “Mighty”. She also “does” a great Tina Turner on the moody ‘Soul’s Come Alive’. Guest vocalist Kylie Auldist takes lead on ‘Love On Tap’ where the root is Muscle Shoals soul rather than urban funk while another guest, Joshua Tavares goes back to the same source for the melancholy ‘Hardest Part Is Knowing’ . Some authentic soul horns on this by the way.

Deep Street Soul certainly play with passion, energy and commitment throughout but what they’ve yet to learn is that funk also needs discipline and structure. (Was there ever a stricter disciplinarian than James Brown?). American bands (like the Dap-Kings) know that and when the Deep Street Soul team learn that basic fact, their music will be that much better.