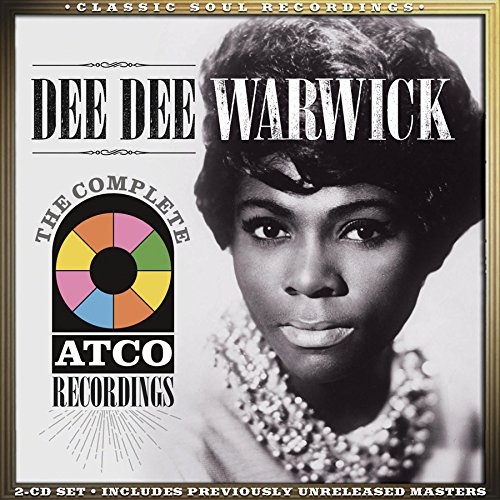 Two years in the career of Delia ‘Dee Dee’ Warwick – the younger sibling of Dionne Warwick – are chronicled by this magnificent 2-CD set which has been assembled, curated and annotated by David Nathan for a Soul Music Records release via rising US reissue specialist, Real Gone Music. The retrospective focuses on Warwick’s short but fertile spell at the Atlantic subsidiary imprint, Atco, following her earlier stints at Blue Rock and Mercury. Having scored five chart hits with Mercury in the latter half of the ’60s (the biggest of which was ‘I Want To Be With You’ in 1966), the New Jersey singer had high hopes of achieving even bigger success when Atlantic executive Jerry Wexler signed her to Atco in 1970. Sadly, she only scored one substantial hit for Atco – the Top 10 US R&B smash ‘She Didn’t Know – She Kept On Talking’ in 1970 – and after cutting a one-off album, ‘Turning Around’ (just reissued at mid-price by Warner Japan) she left the label for pastures new (her final hit was ’75’s ‘Get Out Of My Life’ for Private Stock).

Soul fans who know their stuff will probably be the first to acknowledge that lesser-known Dee Dee had a more deeply soulful voice than her more famous sister, Dionne. It possessed a darker, heavier and much more intense gospel tone than her older sister’s voice and is revealed in all its glory on a chronologically-sequenced 35-track collection that in addition to her complete Atco LP includes all of her 45s (including the non-album singles ‘Cold Night In Georgia’ and a super-soulful take on the Elvis Presley anthem, ‘Suspicious Minds’) and their flipsides. Even more alluring is the fact that the set features a dozen previously unissued sides, which include tracks produced by Ed Townsend, Dave Crawford and Crawford with Brad Shapiro. The unreleased material ranges from plaintive ballads (‘What Manner Of Man’ and ‘Sweet Dreams’) and stomping dancers (‘You Tore My Wall Down’) to tasteful pop covers (David Gates and Bread’s ‘Make It With You’ and Bacharach-David’s ‘In The Land Of Make Believe’) and funky grooves (a jaunty take on Ashford & Simpson’s ‘Can’t It Wait Until Tomorrow’ and a souped-up alternate take of ‘Sweet Dreams’). It’s not hard to see, though, while the awful, awkward and rather puerile ‘Beauty, Duty, Charm And Sex’ was left in the can (evidently it was a song that Warwick resented having to record and soured her relationship with Atco). This is the only blemish, though, on what overall is a superlative collection and whose fine music is expertly contextualised by David Nathan’s informative liner notes.