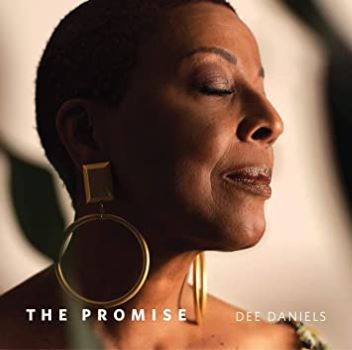 Dee Daniels is a veteran US soul/jazz/gospel singer with a hugely varied CV and her often complex  life journey has constantly coloured her approach to her art. Her first musical steps were taken in her stepfather’s Baptist church in Oakland, California. There she later embraced the soul sounds of the genre’s classic era before locating to Europe where she immersed herself in the music scenes of Belgium and the Netherlands. Returning across the Atlantic, Dee went on to work with people like Benny Green, Russell Malone, Cyrus Chestnut, Clark Terry, Benny Golson, Grady Tate, Toots Thielemans and Christian McBride.

‘The Promise’ is Ms. Dee’s 14th solo album and its music  is a summation of all the places she’s been and all the influences to which she’s been exposed. More importantly though, the album chronicles the singer’s very personal journey of faith and mediation on which she embarked after being diagnosed with cancer in 2014. The booklet which accompanies the album explains fully how Ms Daniels decided to cope with her diagnosis but creating music was one part of the therapy. Interestingly, the devastating news never dulled the singer’s faith. Indeed, she believes it strengthened her convictions  with many of the songs , she says, “being gifted” to her.

Sonically the 14 tracker is a mix of the sounds that Dee grew up with and embraced in her career – sophisticated soul, smooth jazz, a little blues but above all gospel. ‘My Prayer’ is one of the set’s focus cuts while the balladic and semi-autobiographical ‘I Am Forgiven’ explains the context of the whole album.

‘The Promise’ is never an easy listen. Its creation was clearly cathartic  but listening will offer up a number of rewards to anyone seeking some sort of direction.