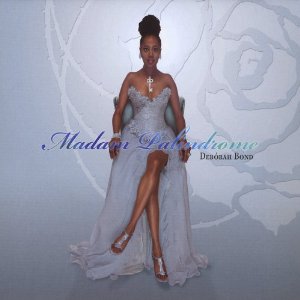 ‘Madam Palindrome’ is Washington DC-based Deborah Bond’s third full solo album – though her second set, ‘After Day’, was a remix of the first, ‘Day After’. A bit confusing, yes… but nothing confusing about this new one. ‘Madam Palindrome’ is a straight ahead sophisticated modern soul set with a touch of the nu/neo about it and in places you can hear flavours of Anita Baker and Chaka Khan in the work. Those divas are Ms. Bond’s heroines and it becomes obvious almost from the start with the complex second cut, ‘Perfect’. Vocally it’s “very Chaka”… Chaka in down-tempo mode that is. Here, there’s a gritty sweetness that caresses a lyric which is delivered on a musical bed that’s old school soul with a hint of jazz about it. Nowhere, though, do we get a full frontal vocal attack à la Ms. K; maybe Deborah knows that that kind of lung-breaking approach is something that only comes with career maturity. Here, the big “up” numbers – like the enigmatically-worded ‘5.35’ and the bass-heavy ‘You Are The One’ – are rather restrained in the vocal department.

‘Think Twice’ – a sweet ballad’ – is the album’s best Anita Baker moment and ‘Never Was’ is another decent jazzy-soul ramble. On the debit side ‘Mr Day’s Dream’ is just a tad too self-indulgent. The LP’s most interesting cut though is ‘If I Didn’t Need You’. This is a great little chugger that will please sophisticated modern room soulsters. Helping out on vocals is the underrated Lewis Taylor who brings a real edge to proceedings. The set’s first single, though, is the insistent ‘You Are The One’. We’re told there’s a big video to accompany it and if gets decent rotation, the lady could be on her way. She certainly looks the part and if you want to learn more go to www.deborahbond.com