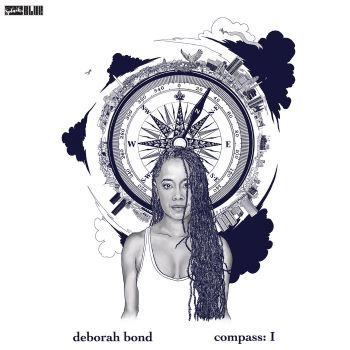 Washington’s DEBORAH BOND has an impressive music CV. She has a clutch of fine solo albums under her belt (I think it was back in 2011 when we reviewed her self-released ‘Madam Palindrome’ LP, but she actually debuted on disc in 2003); she regularly sells out concerts, hosts radio shows, sings sessions and works in musical education too. For the last few years, she’s been working with Bluey Maunick on his Incognito and Citrus Sun projects and earlier this year she announced the imminent release of a new solo collection on Bluey’s Splash Blue label.

The announcement came with the release of the single, ‘radio’… a catchy slice of modern soul with a real vintage feel… the sort of song that would sit beautifully on a classic FM radio show. But listening in carefully ‘radio’ was much more than pleasing ear candy. Lyrically the song was (indeed is) a clever ode to lost love transformed into a song…. the love dies but the music lives on. Now, this, the promised parent LP has just been released and the lovely 9 tracker offers more of the same – i.e., intricate and intriguing messages wrapped in sweet, contemporary and clever soul settings. Clever? Well, hear how she samples the bass line from ‘You Can’t Hurry Love’ on ’time’. Little wonder, then, that album tracks are being regularly rinsed on soul stations while seasoned soul commentators are singing the praise of the collection, making obvious comparison with the work of people like Sade and Anita Baker.

‘compass: I’ was written and recorded during the various lockdowns we’ve endured. Ms Bond says that the quarantine opened a creative portal for her to reflect and to write and record. And, as we’ve just suggested, Deborah was determined to create much more than just pleasing, contemporary soul. She wanted to use her music to explore self-awareness, new love and intimacy and the circumstances of the world around her. The result is a concise set of 8 songs (one track ‘manifetsor’ is a brief instrumental interlude) which suggest subtly that life constantly changes but what counts is how we react to those changes. That message is maybe strongest in ‘burden’ and ‘atlanta’. Note, Deborah uses the lower case intentionally for the song titles. You’ll also see (above) there is no colour in the artwork. The picture is a simple sketch. All those elements designed, we’re told, to enhance the themes of rawness, humility, and darkness which haunt the album. And the album title? Well, Deborah says she used an inner compass to create the music and to lead her to a “new tribe” of musicians – including exec producer and bassist Brandon Lane, sax man Trey Sorrells, drummers Nate Smith and Corey Fonville and songwriter Gordon Chambers.  Between them they’ve crafted a modern soul album which explores a raft of complex issues without ever sounding “heavy” or didactic. Little wonder it’s winning plenty of plaudits. Out now.