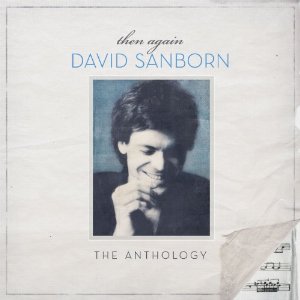 Florida-born David Sanborn is rightly regarded as a doyen amongst smooth alto saxophonists. Raised in Kirkwood, Missouri, Sanborn took up the saxophone on his physician’s advice – a young Sanborn had suffered from polio and his doctor reckoned that the instrument would assist and strengthen his breathing. Little did the doctor know that his words kick-started an extraordinary musical career.

Sanborn’s professional musical odyssey began as a member of Little Milton’s road band; then there was a stint with Paul Butterfield which led to stage and studio work with the likes of David Bowie, James Brown, Stevie Wonder, Gil Evans, the Eagles, Elton John and Bruce Springsteen. Working in such august company brought the young altoist to the attention of a number of record companies and in the early 70s he signed with Warner Bros… and it’s from his 20 year tenure at that label (and its sister label, Elektra) that this 2 CD, 29 track anthology is compiled.

The collection begins with ‘The Whisperer’ – taken from his first solo album, ‘Taking Off’ and that’s followed by all his big tunes including the Marcus Miller-productions ‘Hideaway’ and ‘Chicago Song’, ‘One In A Million’ (from ‘Voyeur’ – an album Sanborn candidly admits was recorded under the influence of all kinds of illegal substances) and the Tony LiPuma production of ‘Try a Little Tenderness’.

Thankfully, there’s also plenty of material representing his collaborations with Bob James. The sinuous ‘Maputo’ remains outstanding while the Al Jarreau-vocalised version of ‘Since I Fell For You’ stands repeated plays. Sanborn picked those tracks himself. In fact he’s compiled and sequenced the whole album and the included essay/conversation with David Ritz means that the collection is about as definitive as you’d ever get.