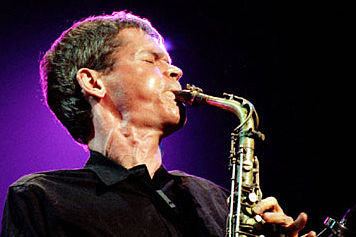 Now seventy years old and with probably thousands of gigs under his belt, veteran alto saxophonist David Sanborn can be forgiven for occasional memory lapses. Talking to the audience in between songs at this Sunday evening concert, he claimed he had never been to this part of the UK before, but this writer can attest that Sanborn played at Cheltenham Town Hall back in 2001 as part of that year’s jazz festival. No matter. At least, thankfully, Sanborn still remembered how to play the sax, which he did with his customary sense of soulfulness and vigour even though he was safely ensconced on a stool for most of the night. His set began with a driving take on Stevie Wonder’s ‘Another Star’ which segued into a tasteful rendering of ‘Maputo,’ the classic Marcus Miller-penned opener from ‘Double Vision,’ Sanborn’s classic 1985 collaboration with Bob James. With its seductive mid-tempo groove, the track highlighted the great band that Sanborn had behind him. They included MD Rick Peterson on keys, Nick Moroch on guitar and drummer Billy Kilson, plus a bassist and percussionist. The tropical vibe of ‘Camel Island’ was followed by a drums and percussion breakdown and then a great rendition of the self-penned ballad, ‘Ordinary People,’ from his latest album ‘Time & The River,’ which spotlighted Sanborn’s distinctive crying alto sound. After that, the band shifted gears for a searing chunk of muscular funk which then morphed into the Sanborn favourite, ‘Chicago Song.’ The saxophonist’s band certainly knew how to groove, providing a solidly syncopated platform for Sanborn’s molten horn blowing.