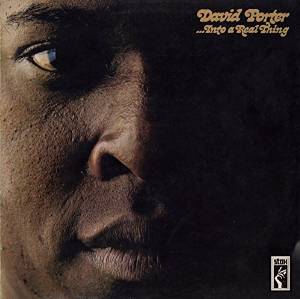 This Memphis-born singer/songwriter/pianist is best known as Isaac Hayes’ songwriting partner in the 1960s. Soul music’s equivalent to Lennon and McCartney, perhaps, during that decade they wrote a raft of immortal songs together – among them Sam & Dave’s ‘Soul Man’ and ‘Hold On, I’m Coming,’ Carla Thomas’s ‘B.A.B.Y.,’ Mable John’s ‘Your Good Thing (Is About To End),’ the Soul Children’s ‘The Sweeter He Is,’ and Judy Clay and William Bell’s ‘My Baby Specializes.’  When Isaac Hayes solo career took off in the late ’60s, Porter aimed to follow suit and in 1970 issued his debut for Stax’s Enterprise imprint, ‘Gritty, Groovy, & Getting’ It’ (reissued by Ace a couple of years ago). Released later the saem year was Porter’s second album ‘…Into A Real Thing,’ which, unlike its predecessor, included a good handful of original songs, all penned with his new songwriting partner, Ronnie Williams.

The album opens with an ambitious and grandiose deconstruction of ‘Hang On Sloopy,’ originally a big pop single for the band, The McCoys, in 1965. Porter, following Isaac Hayes’ example of transforming pop material into extended soul symphonies, turns the song into an eleven-minute widescreen epic. It’s not as memorable, perhaps, as Hayes’ similarly-styled takes on ‘By The Time I Get To Phoenix’ or ‘Walk On By,’ but it’s certainly arresting and dramatic though in its spoken monologue passages, Porter’s voice doesn’t have the gravitas of Hayes’ basso profundo. By contrast, the Porter co-penned ‘Ooo-Wee Girl’ is a more orthodox ballad elevated by his passionate, raspy lead, which is framed by rich orchestration and female backing vocals. There’s a hint of Norman Whitfield-era Temptations’-style psych-funk intro on the tense ‘Too Real To Live A Lie’ while ‘Grocery Man’ is a gutsy, rough-hewn chunk of brassy soul. The tempo drops for the subdued bittersweet ballad, ‘I Don’t Wanna Cry’ – produced by Isaac Hayes – where Porter shows great sensitivity via his superbly-nuanced vocal performance. The set’s closer, ‘Thirty Days,’ is more upbeat despite its pleading tone and rounds off what is a strong sophomore LP from Porter, who couldn’t emulate Isaac Hayes’ superstar status but nevertheless witnessed the album penetrate the US R&B albums Top 10 in early ’71.

What makes this fresh reissue more desirable is the addition of three rare bonus cuts, originally orphaned songs that had no parent LP. Though their provenance is unclear, stylistically they are in harmony with the sound and vibe of ‘…Into A Real Thing.’ The first, ‘Come Get From Me (Parts 1 & 2),’ is a bluesy mid-tempo groove, while the second, the gentle, meditative and quite lovely ‘Gotta Get Over The Hump,’ is a previously unissued side discovered in Stax’s vaults. The final cut is ‘Somebody’s Trying To Ride Piggy Back,’ an archetypal slice of Southern soul built on a throbbing bass line that finds Porter’s declamatory vocal punctuated by zesty horns. An essential acquisition for connoisseurs of ’70s soul.