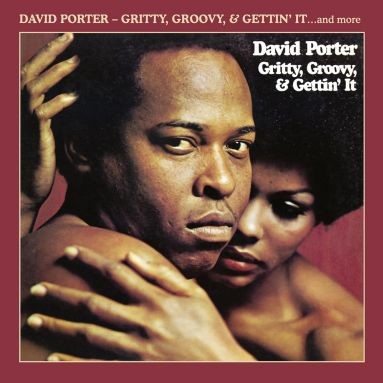 David Porter is best known for his writing partnership with Isaac Hayes. The pair penned countless Memphis gems – most notably for Sam & Dave and the Soul Children. They dissolved their partnership in 1969 when Hayes became an overnight star on the back of ‘Hot Buttered Soul’. That still phenomenal long player was a massive cash generator for Stax so there was plenty of logic in the company execs getting Porter into the studio to make a record too… and who better to produce it than his old sparring partner. The result was 1970’s ‘Gritty, Groovy & Gettin’ It’ – now reissued via UK label Ace’s access to the Stax catalogue.

Hayes and Porter were savvy enough to know that there would be little mileage in crafting another ‘HBS’ but they also knew that the record buying public at that time had a penchant for classy remakes of old soul favourites. So, the set was stuffed with old songs like Gene Chandler’s ‘Just Be True’ and Jerry Butler/The Impressions’ ‘I’m A-Tellin’ You’ but rather than extending them into epics, Hayes and Porter kept each track reasonably compact. Sonically, though, there are similarities with Hayes’ album. The new arrangements of the songs are innovative and quite different to any of the originals (e.g. The Temptations’ ‘The Way You Do The Things You Do’) while the orchestration is lush and full throughout and like ‘HBS’ the backing vocals – supplied by the same trio (Rose Williams and Pat and Dianne Lewis) – have that eerie, echoey flavour that’s strangely appealing.

Album standout is also the longest cut … a six minute version of a song called ‘Can’t See You When I Want You’, which Porter had originally recorded back in ’65 when he harboured ambitions as a performer. This new version includes a mini Porter rap and a competent soulful vocal. ‘Just Be True’ is worth checking too (any Curtis Mayfield songs is always recommended!)

This reissue comes with a number of collectors’ bonuses… both sides of that original ‘Can’t See You When I Want You’ single; a pair of previously unissued cuts from the same period sessions; and a trio of radio jingles.

‘Gritty, Groovy & Gettin’ It’ fared well on the R&B charts but meant little pop-wise. For sure, it wasn’t another ‘Hot Buttered Soul’, but despite that Stax persevered, releasing three more Porter solo sets… which Ace hope to reissue in the future.