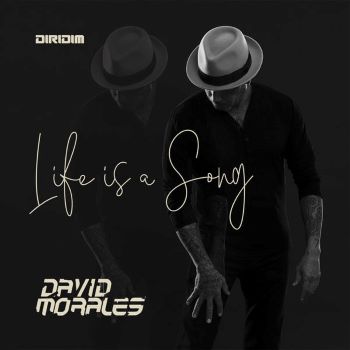 In mid-January we enthused about a  new single from soulful house don DAVID MORALES. In both mixes, ‘Life Is A Song’ was just outstanding. We were told that the tune was the title track to the vet’s upcoming album and, right on cue, said long player is with us. And the good news is that the album is brimming with plenty more soulful house gems cut from the same cloth as that title track, that’s to say boss beats, swirling rhythms, Philly style strings and vibes, catchy melodies and memorable choruses and committed, soulful vocals.

The vocalist on ‘Life Is A Song’ was Michelle Perera and she fronts a further album track – ‘Never Give Up’ . This one, clocking in at just over 6 minutes, is another winner with a Philly style swagger that’s impossible to ignore. It ticks all the boxes that soulful house music demands. The same goes for ‘Easy’ (Joe Roberts at the mic), ‘Can’t Get Enough’ (a collaboration with Blakkat and Paolo Sessa), ‘No Boundaries’(fronted by Tilly), ‘Come The Moment’ (listen up to the booming bass line here), ‘Never Looking Back’ (vocal from Lea Lorien), ‘Second Chance’ (another collaboration with Blakkat) and ‘I Can Dream’. That last one, fronted by ever-reliable Ultra Nate, is an album highlight and betrays Morales’ influences and lengthy experiences in the crazy world of soulful dance music.

Morales however is savvy enough to know that an album of this length needs some variety and on ‘Life Is A Song’ he lobs in a few curved balls. Indeed he starts the album with one – a glorious cover of Donna Summer’s ‘I Feel Love’. Here, Elle Cato reprises the Donna Summer role; electro disco at its best! ‘Party In Da Ghetto’ uses a similar bass line. Morales fans will recognize this as a rework of his classic ‘In De Ghetto’. There are more Afro/Caribbean flavours on ‘Hela’. For something quite different try the Euro pop disco flavoured  ‘What Can I Do’- insistent and percussive.

So yes, plenty of variety on this album but all unified by the classic Morales’ optimistic, hands in the air vibe. This is Mr M’s first full album in something like 10 years and it’s clear all the enthusiasm’s  still there. He says: “There are lots of great sounds and textures out there, and I have been evolving and exploring, but always keep that classic groove. There’s plenty more to follow, but for now I hope that it can spread positivity and joy to all who hear it.” Amen brother!