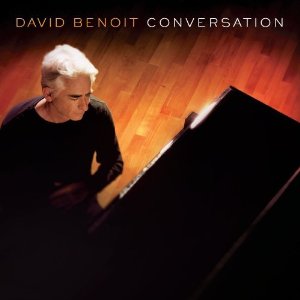 David Benoit has been making his particular brand of jazz for over 30 years and on the way he’s built a loyal fan base who’ll be delighted with this new 9 tracker. It offers, you see, all the elements that those fans have come to expect. There are plenty of the signature smooth jazz items that have become something of a Benoit speciality, the most notable being ‘Feelin’ It’. A cross between the best of Bob James and prime time Spyro Gyra, it could define where smooth jazz is at right now. ‘Napa Crossroads Overture’ ‘Kei’s Song Redux’ and ‘Sunrise On Mansion Row’ offer more of the same flavours and none of that trio would be out of place in a mature American romantic movie – you know the ones with clever scripts, sweeping sunsets and either Meryl Streep or Barbra Streisand in the lead role.

No one doubts that Benoit can do complex too; there’s plenty here to prove the point. Maybe the most ambitious cut is the closer – the LP’s title cut which is indeed a conversation between a classical trio (piano, violin and cello) and a jazz threesome (Fender Rhodes, electric bass and drums). Maybe just a bit too clever though. The pacey ‘Q’s Motif’ is clever too with spacey synth fills breaking up the tune’s general flow and thrust. ‘Let’s Get Ready’ is an interesting take on 60s soul- jazz while the usual Latin element comes with the atmospheric ‘You’re Amazing’. That leaves the odd one out so to speak – ‘Diary Of A Wimpy Kid’ – the only non-Benoit-penned tune on the album… and it shows. Clearly a fun piece, Benoit and his crew (which includes Jeff Golub on guitar) romp through the 2010 movie theme. Benoit says in the notes here that his aim with the album was for people to come away feeling good… and I guess his fans will. There’s nothing here they could dislike.