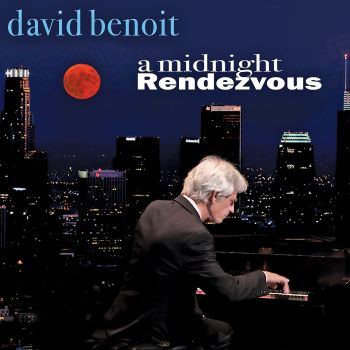 ‘A Midnight Rendezvous’ is veteran keyboardist David Benoit’s umpteenth album. David himself might have lost count seeing as he started way back in 1977! However even a smooth jazz elder statesman likes to break new ground and on the album Benoit does just that. Fulfilling a long-standing dream of writing and arranging for a 12-piece big band, ‘A Midnight Rendezvous’ offers three tracks that swing and swagger in the very best tradition of the big band era. David says: “The idea began when I was an artist in residence in Saratoga, CA and I was looking for something unique to do. I decided to write a big band arrangement for my ‘Cabin Fever’ on the record. I initially started arranging on my computer but the greatest thrill was hearing the playback with the real players in the big band when the project progressed. Wow! It was one of the most exciting sessions I’ve done in many years.”

The three tracks that provide the excitement are ‘Generations’, ‘Waiting For Spring’ and ‘Cabin Fever’. The trio are all Benoit originals and they all offer something a little different. ‘Generations’ is a jazzy, building,  mood shifter; ‘Waiting For Spring’ is brash and brassy and recalls those great swinging big band arrangements of people like Nelson Riddle; ‘Cabin Fever’ is another big item with a percussive propulsion which might suggest that the Buddy Rich Band was the template. Benoit’s piano features throughout but it’s clear here he’s a team player – going with the flow of the dozen seasoned sessioneers marshalled by ever reliable Eric Marienthal.

The remaining 7 tracks are what you might call more “traditional David Benoit” – his sparkling but sensitive keys leading small ensembles through melodic and intriguing tunes. A couple of the cuts are classic Benoit sounds. On  ‘Floating’ and ‘You Make Me Smile’ the crystalline keys appear to be just caressed, recalling Benoit favourites like ‘Skating’ and the ever-lovely and still moving ‘9-11’.

Elsewhere the album’s title track ticks all the right smooth jazz boxes while ‘Pioneer Town’ is both jaunty and cinematic.

David Benoit’s ‘A Midnight Rendezvous’ is released via Shanachie on February 18th.