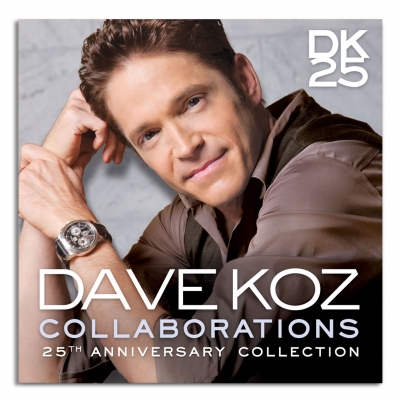 Smooth jazz sax man, Dave Koz is currently celebrating 25 years in the business. In that time he’s worked with dozens of big names in pop, jazz, soul and even country music. He’s also released 20 of his own albums for which he’s been nominated nine times at the Grammys.

To help the celebrations along, our man has just released this – a 15 track long player that brings together some of his very best past work which includes a number of collaborative tracks with some of those  “big names”.

In the world of soul there’s no bigger name than Luther Vandross. In 1999 the big man worked with Koz on his ‘The Dance’ album and from that set, ‘Can’t Let Go (The Sha La Song)’ is included here. Discerning soul and jazz fans will know it already but if you don’t then expect something quite different. There are no words. Luther just injects some lovely ‘Sha Las’. But he does it like no other and it makes you realize the size of the void his sad passing left.

Amongst the other soul highlights is a Michael McDonald vocalised version of Tower Of Power’s ‘So Very Hard To Go’ – a perfect choice for a sax man and a soulful voice to collaborate on. It was originally issued in 2103 on a Summer Horns’ album. Another old soul tune on offer here is Jackie Wilson’s evergreen ‘Your Love Keeps Lifting Me Higher Than Higher’. This is one of several brand new recordings and features Kenny Latimore on vocals while Rick Braun adds some tasty horn licks. Sure, it’s a lot smoother than Brother Jackie’s original but it’s such a good tune isn’t it?

Other collaborators on the set include Jeff Lorber, Boney James, Herb Alpert, David Benoit, Brian Culbertson, Barry Manilow, Stevie Nicks and Rod Stewart. Then on another tracks there’s a cast of thousands. Eric Benet, Johnny Mathis, Heather Headley, Maysa, Bebe Winans, Gloria Estefan, Stevie Wonder and more throw their alls into a version of the Beatles’ ‘All You Need Is Love’.

Yep, plenty of big names and big tunes here but, tellingly, Koz rounds off the set with a new recording where he takes centre stage on his own. The tune he’s chosen is the ‘Frozen’ hit ‘Let It Go’. He treats it respectfully and shows why he’s been at the top for 25 years and why so many stars seek him out for collaborations.