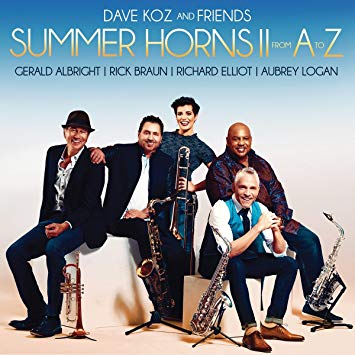 Chiming perfectly with the current heat wave, smooth sax supremo, Dave Koz, has re-launched his “Summer Horns” project. The first Summer Horns was back in 2013 and, if you remember, Dave teamed up with like minded horn players, Gerald Albright, Mindi Abair and Richard Elliot to groove through a selection of soul and jazz classics on which the horn parts were particularly strong. So they treated us to things like ‘So Very Hard To Go’, ‘Got To Get You Into My Life’, ‘Reasons’, ‘Always There’ and ‘Rise’ and jolly good they all were too!

For Summer Horns II, Kos once again works with Albright and Elliot but brings in “newcomers” Rick Braun (trumpet) and Aubrey Logan (trombone and vocals). That aside, the formula is very much like the Mark 1 long player. That’s to say that Dave and his team (which includes arrangers Tom Scott, Greg Adams and Gordon Goodwin) have chosen a great selection (11 tracks in total) of soul and jazz standards where on the originals the horn section was prominent. And the crew nail their flags to the mast from the start with an opening medley salvo that pairs EWF’S ‘Getaway’ with KC’s ‘That’s The Way I Like It’. Big and bold, it sets the tone for make-you-smile versions of ‘More Today Than Yesterday’, ‘Keep That Same Old Feeling’, ‘If You Really Love Me’ and ‘Before I Let Go’ (the Maze classic). All feature a gleaming horn phalanx. The set’s big vocal is a swinging rendition of Natalie Cole’s ‘This Will Be’ – vocalists here are Kenny Latimore and Shelea.

The jazz tunes include ‘Take The A Train’ and ‘Route 66’ while the one selection where the source is neither soul nor jazz is Paul Simon’s ‘Late In The Evening’. If you know it, you’ll know it features township rhythms – fitting then that the guest vocalist is Jonathan Butler.

Harsh critics might opine that that this album lacks a level of imagination. Maybe… but c’mon, it’s summer, the sun’s out (dare we add that England are still in the World Cup!) and what’s wrong with great tunes played with fun, energy and artistry by a top team. Nothing not to like here!