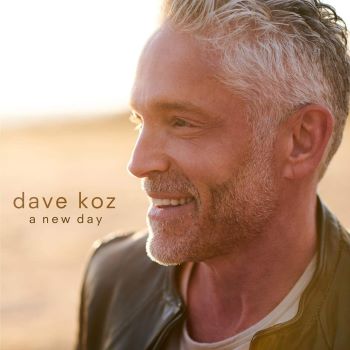 ‘A New Day’ is smooth sax man Dave Koz’s 20th album as leader and, surprisingly, his first solo album of original material since 2010. Though it’s called ‘A New Day’, long time Koz fans have no need to worry. The “new” in the title doesn’t mark a change of direction for Koz. On the 12 tracker he delivers what we’ve come to expect from him – quality, beautifully produced, sax-led smooth jazz with a soulful undertow. The album title and indeed the track of that name take the pandemic as their reference point. The whole affair was recorded at the beginning of the pandemic and Dave choose to be optimistic. He wants to stress that as the world was closing down, he was confident that better times – “a new day” – was in the offing. Musically the track is very much “up”. Neither wild or funky, it suggests hope via its optimistic and memorable sax lines. The track officially closes the CD (save for the bonus cut that is ‘It’s All Love’) and Dave says: “I placed the track last because after having listeners experience so many different emotions, I wanted to leave them with a hopeful smile on their faces, with a little nugget of positive energy and forward momentum in their hearts. We all know these are difficult days…some have lost loved ones, many have lost their jobs or have had their work cut back, and people are afraid every day for our families and friends’ continued safety and sanity. I know how crazy and uncomfortable it all is…and with no end in sight. So, I wanted to end the album with an unmistakable air of hope. “.

A number of the remaining tracks offer the same kind of optimism – none more so than the opener ‘Summertime In NYC’. It opens with a steal from ‘A Lovely Day’ before opening out into a cool, dreamy, summer vibe enhanced by a jazzy, almost scat vocal from Brian McKnight. McKnight is just one of many big names helping Koz deliver here. Also featured on the album are Bob James, Marc Antoine, Rick Braun, Paul Jackson Jr., Jeff Lorber, David Sanborn, Earth, Wind & Fire percussionist Ralph Johnson, neo-soul great Meshell Ndegeocello, saxophone and flute player David Mann and R&B singer Antwaun Stanley (of funk band Vulfpeck). Sanborn has always been a special hero for Dave Koz and his guesting on the self-explanatory, tight groove ‘Side By Side’ is one of the album highlights. Many of the other tracks have a Sanborn-flavour too – most notably the funky, dance groove that is ‘Still Got It’. The vocal here comes courtesy of Antwaun Stanley. ‘Dr Norm’ – another soulful, funky groove – is a tribute to Koz’s doctor dad.

The album also boasts plenty of slower moments too – most obvious being the cover of the Beatles’ ‘Yesterday’. Sounds like a surprising choice. I mean it’s been covered so many times before, but it seems that Koz saw in it a message about the pandemic. He says, “It literally was yesterday that our lives were completely different. The reality now is that we’re going somewhere new. But to get to that destination, you have to have your eyes wide open, while remembering where it is you came from. So, it’s important to reflect that just yesterday, it was all very different. And while we can’t necessarily go back to that innocence, the prospect of a bright tomorrow is something we all CAN focus on.” So, more Koz-inspired optimism – and boy do we need that right now!