DARROW FLETCHER; The Pain Gets A Little Deeper (Kent) 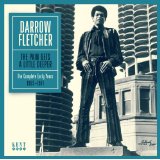 This 23 tracker is Ace/Kent’s second look at the career of the iconic Chicago soul man, Darrow Fletcher. The first album focused on his post 1975 oeuvre, when he worked out of Los Angeles. This new set looks at the period from 1965 to 1971 when he was one of Chicago’s young soul hopefuls. Working with his stepfather, Johnny Haygood, Fletcher’s first releases were on Groovy Records. He then recorded for Jacklyn, Revue, Congress, Uni and Genna without too much success but it’s easy to hear why he’s now a revered icon amongst collectors and indeed why Ray Charles was keen to sign him when he moved out west in 1974.

The best known song here is ‘The Pain Gets A Little Deeper’. From 1965, Darrow was just 14 at the time and its local success meant for a while that people believed that here was a rival to Frankie Lymon. The song’s an urgent, energized two and a half minutes of classic Chicago soul. Elton John cites it as one of his favourite soul recordings! Much mellower are the lovely ‘When Love Calls’ and ‘Sitting There That Night’ while ‘My Judgement Day’ is an early example of socio-soul… a definite Curtis Mayfield feeling about this one.

Collectors will also be delighted that the breathtaking, zippy ‘What Good Am I Without You’ is included. Original 45s of the tune are currently fetching high prices on the collectors’ scene while ‘My Young Misery’ (also included) is not that far behind. More sedate Chicago connoisseurs will love the laid-back ‘Little Girl’, the sweet ‘Those Hanging Heartaches’ and ‘I Like The Way I Feel’ which has the same controlled energy of Darrel Banks’ ‘I’m The One Who Loves You'(also recently available on Kent). Indeed Fletcher occupies a similar revered position as Banks amongst soul cognoscenti. Banks, of course, is not around to enjoy the belated fame. Darrow Fletcher, though, is still going strong. He performed in the UK in 2006 and 2012 and hopefully some royalties from these reissues will be going his way. But my guess is that like all artists (in whatever field) he’ll be more pleased with the acclaim coming his way… albeit 50 years too late!