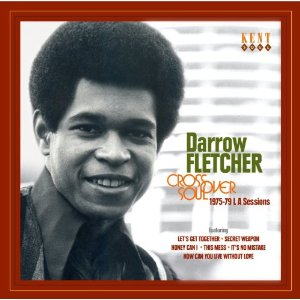 Michigan’s Darrow Fletcher is a cult hero on both the Northern and Modern soul scenes. His fame with the Northern brethren rests on the recordings he made as a young singer after he’d relocated from the Detroit suburb of Inkster to Chicago. In the Windy City he recorded for labels like Revue, Congress and Uni and sides like ‘I Think I’m Gonna Write A Song’ are now eminently collectable. In 1974 Darrow came to the attention of the great Ray Charles who signed him to his L. A. based label, Crossover, and the singer moved across to the West Coast. Between ’75 and ’79 Crossover issued a clutch of singles on Fletcher (some licensed to Atlantic and its subsidiary, Atco). Those singles – along with tracks from a never-released album – form the core of this new Kent 17 tracker and it’s these songs, particularly the lovely ‘The Rising Cost Of Love’, which built Darrow’s reputation with the Modern soul crowd.

The lazy, rolling ‘The Rising Cost Of Love’ is undoubtedly the stand out – easy to hear why the tune enjoys such status on the scene. Interestingly, though recorded in Los Angeles, it was penned by two of Fletcher’s old Chicago buddies –Zane Grey and Len Ron Hanks (with a little help from Philly maestro, Bobby Martin). Indeed many of the tunes Fletcher recorded for Crossover were sourced from Chicago writers – chiefly because, for a time, the singer had been part of that city’s writers workshop started and organized by Jerry Butler. Butler himself provides another of this set’s great tunes – the expansive ‘(Love Is My) Secret Weapon’ – the kind of song that Butler himself would have made a fine job of and the Jerry Butler sound is a good reference point for Darrow Fletcher’s music – smooth, sophisticated yet inherently soulful. Hear it defined on ‘Try Something New’ – another Butler composition with input from Grey and Hanks or the ultra sweet ‘It’s No Mistake’. Both those recordings are amongst the 15 cuts that have never seen the light of day before. Most of ’em were intended for an album that was pulled at the last minute and include an unusual version of Bobby Hebb’s ‘Sunny’ and a funky , social comment song ‘Election Day’ (more Gil Scot-Heron than Jerry Butler!)

The sleeve notes report that Darrow Fletcher is still going strong. Delighted that his music is being reissued, he even pitched up at 2005’s Cleethorpes event where he mixed his Modern songs with some old Northern favourites… maybe a Northern collection on the man is in the pipeline?