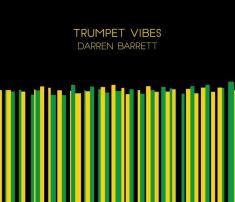 Darren Barrett is a Canadian jazz trumpeter: ‘Trumpet Vibes’ is his seventh album as leader, and the set’s sleeve sets the tone for what’s in the album’s grooves. The cover colour scheme is green, yellow and black – the colours of Jamaica, his parents homeland and throughout the LP’s 8 tracks you’ll hear plenty of laidback reggae rhythms and gentle ska-tinged grooves, most apparent on the cover of David Gates’ ‘Everything I Own’. Here Barrett uses Ken Boothe’s version as his template rather than the Gates’ original, while extra tonal textures come via Simon Mouiller’s crystalline vibraphone. A version of Stevie’s ‘My Cherie Amour’ is one of the album’s other big covers. Again Barrett imposes reggae rhythms on the familiar tune while, in keeping with the album’s title, there’s space too for Mouillier’s vibes. ‘To Sir With Love’ is ‘Trumpet And Vibes’ third cover tune. Always a great, hummable tune, once again Barrett plays it over the rhythms of the Caribbean. The Jamaican influence is less obvious on the fourth included cover… Donald Byrd’s ‘Fly Little Bird’. Byrd was one of Barrett’s early mentors and the tune’s inclusion is a heartfelt homage to the trumpet legend. More vibes, naturally, this time courtesy of guest player Warren Wolf.

The album’s four other cuts are Barrett originals of which ‘The Club Up The Street’ is the most interesting. It’s a busy bustling jazz workout that really does conjures up the atmosphere of the streets and the feel of the classic jazz club. Wolf is the featured vibraphonist once again.

Learn more about this album @ www.DarrenBarrett.com