DARRELL BANKS; I’m The One Who Loves You (Kent) 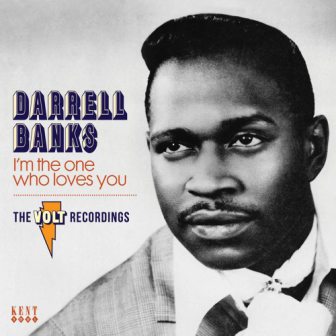 Darrell Banks is revered by soul connoisseurs and his 1966 breakthrough ‘Open The Door To Your Heart’ is rightly regarded as a classic that still impacts…. why, earlier this year Van Morrison admitted the song inspired his own latest album. Praise indeed! Yet despite that early success Banks (born Darrell Eubanks in Mansfield, Ohio in 1937) never made it to soul’s major league. Indeed a turbulent personal life led to his premature death … he was gunned down in 1970 by an off duty policeman who happened to be having a relationship with the woman Banks presumed was his girl!

In four short years though Darrel Banks cut some great soul – including the 19 tracks on this new Kent album which pulls together all the available music he recorded for the Stax subsidiary, Volt. The core of this reissue is Banks’ 1969 album ‘Here To Stay’ – a great soul hybrid – mixing the sensitivities of Memphis and Detroit. Standout cut is the classic ballad ‘Just Because Your Love Is Gone’. It was the lead single, but for reasons hard to explain, it bombed. Other great cuts on the LP include a version of Jerry Butler’s ‘Only The Strong Survive’ and Don Davis’s ‘No One Blinder Than A Man Who Won’t See’.

The CD come complete with 8 bonus tracks – including Banks’ second most famous recording – ‘I’m The One Who Loves You’. The cut was actually on the B side of ‘Just Because You’re Love Is Gone’ and was left off the album… deemed by the Stax execs as unsuitable (it had been recorded earlier and in Detroit). But as is often the way, it was discovered by the UK soul crowd who turned it into a Northern/Modern soul anthem…. and no wonder; it’s an effortless piece of soul music and like ‘Open The Door To Your Heart’ everything about it is bob on! Hardly surprising that the Ace/Kent people have used the song as the title for the collection. The other bonuses include a quartet of previously unreleased demos that beg the question as to what might have happened had that off duty police officer, Arthur Bullock, not been so trigger happy.