DARONDO: Listen To My Songs (BGP) 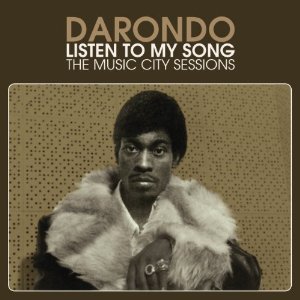 William Daron Pulliam was born in Berkley, California but as a teenager he decamped to Frisco’s East Bay area, where he became the guitarist for top local vocal group The Witnesses. Then in 1973, using his “Darondo” nickname, he signed to Ray Dobard’s Music City label as a vocalist. There in two marathon sessions he recorded 16 tunes and thought he was on his way. The shrewd, hard-headed, hustling Dobard had other ideas. He cherry-picked what he thought were the two best cuts to release as a single and then released Darondo from his contract. To say that the split was acrimonious would be an understatement (death threats were exchanged) and in the end Darondo moved on…. to become a cult cable TV personality, a cruise ship entertainer and general player around town.

The Ace/BGP people – who now have access to Dobard’s Music City vault – recently unearthed all the Darondo tracks and have assembled them here using a title that was one side of the man’s only single. It was/is, however the other side – ‘Didn’t I’ that has re-sparked the interest in Darondo. It’s a truly plaintive ballad with some quite lovely harmonies. It proves that despite all his shortcomings, Dobard could pick a good tune, ‘cos little else here matches it. ‘I’m Lonely’ is an attempt to recreate the same rustic sound while much of the rest are gritty, sparse chunky beaters featuring Darondo’s scratchy guitar and unique vocals. His sound is odd. It’s strained, almost tortured and in places off key. That, though, gives it a peculiar sort of charm. It’s truly distinctive (some might say disturbing) but it’s certainly soulful – hear it at its most bizarre on the hushed ballad ‘Saving My Love’. One thing though is clear … with proper production and better guidance maybe Mr D could have been bigger. There’s one cut here – ‘Do You Really Love Me’ – that has huge potential. It’s a mellow mid-tempo item that with better production (the catchy brass higher in the mix, maybe) and more polish could have been Darondo’s breakthrough. As it was, William Daron Pulliam became another soul might have been… albeit with a totally unique approach to the genre.