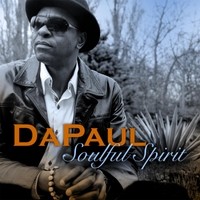 2013’s been a vintage year for British soul albums. There’s been plenty to celebrate with fine long players from people like Nathan Adams, Omar, Don-E, The Brand New Heavies, Personal Life and, of course, Bluey’s incomparable solo debut. Now here’s another name to add to that garlanded list – DaPaul. DaPaul is a London based singer/songwriter whose musical roots go back to the London gospel circuit. From there he went on to work with people like Eternal, Cleopatra, Alex O’Neal, Jhelisa, Kloud 9 and Gabrielle but for the past few years he’s been working on this his solo debut… a fine contemporary soul set featuring a dozen, “proper”, well crafted songs… songs with a structure, decent melodies and thoughtful, mature and, at times, provocative lyrics. They’re delivered in DaPaul’s distinctive, soulful baritone that betrays his gospel apprenticeship while the musical backdrops are delivered by his friends – the cream of the UK soul session scene. Yet despite all this obvious excellence DaPaul found it hard to get any kind of deal and ended up hawking ‘Soulful Spirit’ round the London record stores to see if anyone would handle it. Luckily a number of shop owners heard the album’s potential and before long top soul commentator and good friend of soulandjazzandfunk, Toby Walker, got hold of the album and featured it on his excellent web site, www.soulwalking.co.uk and from there the buzz has grown so much so that album tracks are now being play listed on major radio stations.

Listening, it’s easy to hear why stations like Jazz FM are so keen on ‘Soulful Spirit’. It’s an adult soul album – right on the vibe that the station is proud to promote. The flavour and atmosphere of the album are best summed up in the title cut and the lead single, ‘My Gift’ – a pair of haunting ballads that will touch a chord with any listener. ‘Evergreen’ is another gentle, insinuating cut but there’s lot of other flavours too. ‘Let Me Go’ is a very crisp, soul beater (the modern soul crowd need to check this one); the social commentary that is ‘Red Blood Streets’ has an 80s electro vibe; ‘Fair Trade’ is a jazzy builder; ‘Free & Satisfied’ ploughs the neo-soul groove; ‘Kumbaya’ (no, not the old Boy Scout song!) is light and lovely with a hint of Stevie Wonder about it while on the closing ‘Don’t Stop Dancing’ our man lets rip with his vocals.

The real highlight though is the opening track, ‘She’s So Entertaining’. It’s a quite lovely, laid back thing… thoughtful and sincere. The chorus also features the catchiest of ear-worms, aided an abetted by a hypnotic brass riff. Discover more about this magical song and indeed the whole album @ www.dapaulmusic.co.uk and watch out for an exclusive interview with DaPaul here @ SJF very soon.