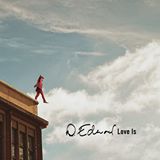 Multi-instrumentalist and singer/songwriter D Edwards hails from Oakland, California where he grew up enjoying his parent’s soul music preferences. He cut his own pro musical teeth on the San Francisco Acid Jazz scene and is currently the percussionist with revived soul and funk band ConFunkShun. D is, though, also a half-decent soul singer – as evidenced on this, his new album on which he not only handles percussion and keyboard duties but takes lead vocal on every track.

The soundscape of ‘Love Is’ is old school soul… testament to D’s upbringing and musical preferences. He also prefers to use real, live instrumentation and the album features a particularly perky brass section. They’re to the fore on a pair of strong tunes – ‘Hold On’ and the LP’s title track. The former is a stately, mid-tempo beater with just a hint of ‘Midnight Train To Georgia’ on the brass intro; the latter is gentle and insinuating and easy to hear why it was chosen as the album’s title track. Musically and lyrically it sums up what the long player is all about.

Standout track though is a moody ballad called ‘Show Me’ which features a great guest vocal from Jenna Lavoie. Like all great soul pairings, this twosome sound like they were made for each other, especially on the harmonic chorus hook. ‘Mesmerized’ is another goodie and possibly the set’s most unusual track. It has a hint of loose jazz about it and features a weaving sax courtesy of Tony Peebles. Add to those, plenty of chunky, solid, mid-tempo beaters (‘Waiting’, ‘One For The Money’ and ‘Don’t Say’) and you have varied and intriguing old school soul set. Expect no gimmicks and no pyrotechnics here… just a bunch of soul-loving musicians playing what they know they do best.

The album will be available to fans via D Edward’s Bandcamp page from September 16th. Worldwide release will be October 21st.