CURTIS MAYFIELD’S IMPRESSIONS: ‘People Get Ready – The Best Of’ (Spectrum) 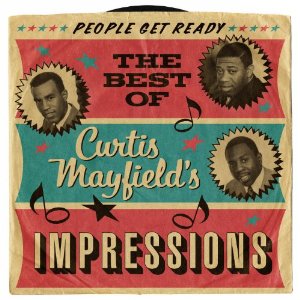 This terrific 2-CD anthology of the profoundly influential Windy City vocal harmony group led by Curtis Mayfield focuses on the trio’s most fertile period. During a heady seven-year spell for ABC-Paramount Records represented by the years1961-1968, the group laid to rest the spectre of their ’50s co-founder, Jerry Butler, and established themselves as a prolific chart act in the USA, where they racked up 25 R&B chart entries, including a brace of chart toppers. More importantly, they established an immediately identifiable blueprint for gospel-influenced Chicago soul that would make them one of the most important African-American harmony acts of the ’60s.

The mastermind behind their success was singer, guitarist and ace songwriter, Curtis Mayfield, whose gentle, seraphic voice gave the group a distinctive sound. ‘Gypsy Woman’ was the group’s first big hit without Butler but it was surpassed by 1963’s ‘It’s All Right,’  which went to #1 in the US R&B charts and #4 in the pop lists. As compiler Bill Buckley observes in his insightful liner notes, it was a record that gave birth to the classic Windy City soul sound. But driven by Mayfield’s songwriting genius, The Impressions were never destined to be one hit wonders or an ephemeral, ‘here today, gone tomorrow,’ chart act – a welter of big hits followed, all of which are present on this new retrospective: including the potent and uplifting Civil Rights-themed anthems ‘Keep On Pushing,’  ‘I’m So Proud,’ ‘People Get Ready,’ and ‘We’re A Winner.’ There are forty tracks in all and there are no duff ones or filler – to quote Mayfield, ‘everyone’s a winner.’ Curtis Mayfield might be long gone but the timeless music he created lives on – and this fabulous new compilation captures the supremely soulful essence of his ‘gentle genius.’