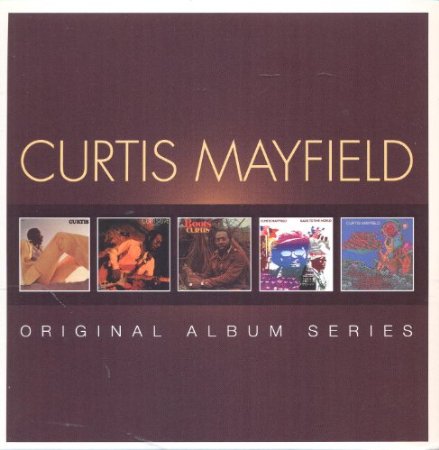 The incomparable Curtis Mayfield is the latest artist to get the Warner/Rhino “Original Album series” treatment and his pack contains the Gentle Genius’ first five “proper” solo albums – ‘Curtis’, ‘Curtis Live!’, ‘Roots’, Back To The World’ and ‘Sweet Exorcist’. Of course, we know that the soundtrack to ‘Superfly’ came right after ‘Roots’ and between ‘Superfly’ and ‘Back To The World’, Curtis squeezed in another live set – this one a wonderful look back at his Chicago roots but to all intents and purposes here we have the foundation stones that elevated Curtis to legendary, iconic status.

If you weren’t on the scene back in 1970, it’s impossible for you conceive the impact that Curtis’ eponymous solo debut had. Honestly, there was howling and gnashing of teeth when soul fans leant that Mayfield was quitting the Impressions. “How dare he!” was their retort… but when ‘Curtis’ hit the sales racks, he was totally forgiven. The album is and remains one of the very few absolute classics of any genre. From the opening spite and venom of ‘(Don’t Worry) If There’s A Hell Below We’re All Going To Go’ to the gentle introspection of ‘Give It Up’, it’s a five star set all the way. I mean… ‘Move On Up’, ‘We The People Who Are Darker Than Blue’, ‘Miss Black America’, ‘The Makings Of You’ need I go on? Yep, ‘Curtis’ was the ‘Sergeant Pepper ‘of soul.

The 1971 live album, cut at New York’s Bitter End featured many of the songs from ‘Curtis’ and reprised some Impressions’ classics too… but the big surprise was a cover of the Carpenters’ ‘We’ve Only Just Begun’, to which Curtis gives a unique Civil Rights slant. And that was one of the many attractions of Curtis Mayfield. He never ceased to surprise and thereby inspire and uplift. ‘Roots’, ‘Back To The World’ and ‘Sweet Exorcist’ have an abundance of such examples. The message was and still is in the man’s music.

Like everything in the Original Album series, these five albums are presented as mini LPs. The set’s a lovely artefact… a great stocking filler for any soul fan.