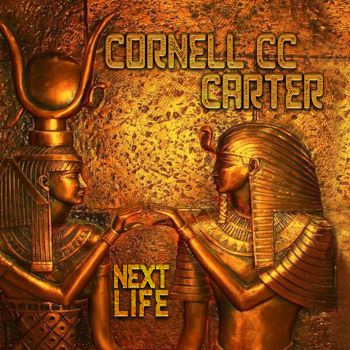 It’s always big news when a major player releases new music and over the last few years  San Francisco’s CORNELL CC CARTER has indeed emerged as a major player. The onetime session and bv singer (he’s worked with people like Ray Charles, James Brown, The Whispers, The Temptations, Natalie Cole, Kool and the Gang and most recently Narada Michael Walden) stepped out on his own in 2016  with the  album ‘In The Moment’ which won him plenty of admirers. From then on, that  number of admirers has grown with each release till now he’s (rightly) accepted (particularly in the UK and Europe) as a major soul contender – so yes, great news to have a new album from CC! And the 14 tracker that is ‘Next Life’ doesn’t disappoint and with the right exposure his upward career trajectory is all set to continue.

This album was heralded back in June via the single, ‘Not Possible’ and it quickly became a soul radio favourite  and it still sounds fresh amidst the other 13 cuts. You’ll remember, it’s upbeat – a sort of definition of contemporary, danceable soul. If that’s your thing, you’ll be pleased to know that there’s plenty more of the same. Get past the opening spoken intro and you can enjoy the stately groove of ‘I’m Here’, the crisp, stepper ‘Tonight’, the pacey ‘Upside Down’ and the more dramatic Norman Whitfield/ Marvin Gaye flavoured ‘The Moment’. Then there’s ‘Experience’ which works around a Caribbean vibe.

All great tracks, but my contention is that the measure of soul artistry comes via an artist’s handling of slower , more mellow tunes. A beater can  offer hiding places as the listener focuses on the groove and the beats but on a slower tune, the performer needs to deliver. I’m pleased to report that on ‘Next Life’s’ mellower moments, CC delivers in spades. ’How It Is’ and  ‘Don’t You Love it’ are classy, mid-tempo moments while ‘First Time’ and ‘Next Life’ are both sweet and lovely. The highlights, though,  are the cover of Heatwave’s 1976 Rod Temperton penned ‘Sho’ Nuff’ (maybe Cornell was inspired by Luther’s cover of their ‘Always And Forever’?) and the closing track, ‘Real’. That last one is a real gem – five and half minutes of contemporary soul balladic perfection. Sweet melody, sympathetic production, tender performance and gentle harmonies. This ‘Real’ ticks all the boxes and towards the end as it morphs into the Carpenters’ ‘We’ve Only Just Begun’, there’s soul satisfaction a-plenty. A lovely end to a lovely album!