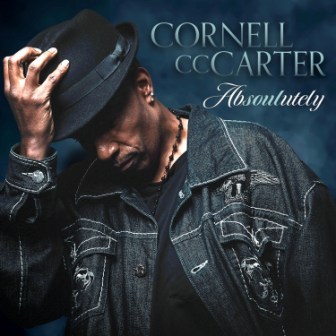 We’ve said it plenty of times this year already, but we need to say it again. 2019 has been a vintage year for modern soul albums. We’ve enjoyed a bumper harvest of fine, new material and now adding to the crop is the long awaited new LP from Cornell CC Carter… aptly titled ‘Absoulutely’.

As is the modern music marketing way the album was flagged up nice and early… July to be precise when Mr C released the set’s first single – a lovely, smooth and gentle sophisticated modern soul dancer ‘I See Love’. That single absolutely whetted our collective appetites but to keep us in suspense the single was beautifully remixed by the Metlife team (Michael Gray/Jon Pearn). Now, the waiting is over and the album is amongst us and the good news is that there are plenty more potential modern room floor fillers amidst the ten tracks. ‘I See Love’ still sounds good but ‘Say Yes’ and ‘I Could Never’ are cut from the same cloth. If you want something a tad more frantic then try the interesting ‘Ghosted’… proper pace here.

However, the album’s big focus cuts have to be the two covers and by his selections, Cornell shows that he’s confident to tackle the giants – Marvin Gaye and Curtis Mayfield. CC offer his perspective on Curtis’ ‘We’re A Winner’ and Marvin’s ‘Come Live With Me Angel’ and he treats both with respect – these new versions aren’t too far from the originals and vocally Mr C’s close to both maestros. Indeed the spirit of Gaye, in particular, can be felt in numerous places around the album. For instance the track that precedes ‘Angel’ is a seven minute plus, sensual ‘Earn It’ that could’ve come right out of the Marvin Gaye and/or Leon Ware songbook. We all know that Marvin was a master of duets too and here there’s a corker of one… ‘Morning Touch’ on which Cornell teams up with Naté Soulsanger.

That particular track, by the way is produced by James Day though the bulk of ‘Absoulutely’ was produced by Carter himself in tandem with Kirk Crumpler. Also helping out is Cornell’s old pay master and mentor Narada Michael Walden who must be “absoulutely” delighted by what his protégé has achieved here. Yes, another fine album in vintage year!